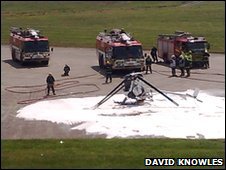 The light aircraft was hovering above the tarmac at the western edge of the airport when it came down on Saturday.

Emergency crews were sent to the scene but, despite his injuries, the pilot walked away from the aircraft, which suffered some minor damage.

The Air Accidents Investigation Branch (AAIB) has been informed.

The man had been piloting the two-seater aircraft on a training flight at about midday when he got into difficulties.

An emergency response, including five fire engines and two ambulances, was carried out.

It is not clear how high the helicopter was before it came down, an airport spokesman said.

"The pilot walked away, but he sustained some head injuries and was taken by ambulance to hospital," he added.

His condition is not known.

The accident did not affect the airport and flights continued to operate as normal.

An investigation will be carried out into the crash.