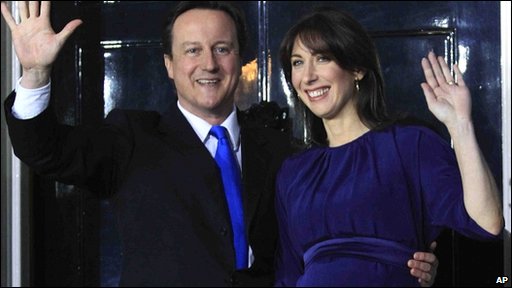 New UK Prime Minister David Cameron is beginning to shape his government, after the Conservatives agreed to form a historic coalition with the Lib Dems.

Mr Cameron, 43, was installed as PM on a dramatic day that saw Lib Dem leader Nick Clegg announced as his deputy.

Four other Lib Dems will take cabinet posts in what is the first coalition government in the UK for 70 years.

The coalition is the first time the Conservatives and Liberal Democrats have had a power-sharing deal at Westminster.

The Conservatives won the most seats in last week’s general election, but not enough to secure an overall Commons majority, resulting in a hung Parliament.

Following days of talks between the Tories and Lib Dems – and also the Lib Dems and Labour – on forming a new government, a deal was reached on Tuesday that resulted in Labour Prime Minister Gordon Brown resigning. 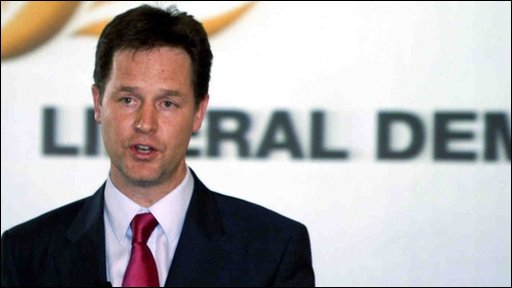 Mr Cameron has already begun the work of appointing his first cabinet, with the Tories’ George Osborne as Chancellor, William Hague as Foreign Secretary, Liam Fox as Defence Secretary and Andrew Lansley as Health Secretary .

Mr Clegg’s chief of staff, Danny Alexander, who was part of the party’s negotiating team, is to be Scottish Secretary, the BBC understands.

Lib Dem Treasury spokesman Vince Cable has been given responsibility for "business and banks" but it is not known if his title will be chief secretary to the Treasury, a senior Lib Dem source said.

There are expected to be about 20 Lib Dems in government jobs in total.

Meanwhile, details have been emerging from Conservative sources about the new government’s programme, including:

There will be a "significant acceleration" of efforts to reduce the budget deficit – including £6bn of spending reductions this year. An emergency Budget will take place within 50 days Plans for five-year, fixed-term parliaments, meaning the next election would not take place until May 2015 The Lib Dems have agreed to drop plans for a "mansion tax" on properties costing more than £2m, while the Conservatives have ditched their pledge to raise the inheritance tax threshold to £1m The new administration will scrap part of Labour’s planned rise in National Insurance and will work towards raising income tax thresholds for lower earners A pledge to have a referendum on any further transfer of powers to the EU and a commitment from the Lib Dems not to adopt the euro for the lifetime of the next Parliament The Lib Dems have agreed to Tory proposals for a cap on non-EU migration The Conservatives will recognise marriage in the tax system, but Lib Dems will abstain in Commons vote The Lib Dems will drop opposition to a replacement for Britain’s Trident nuclear missiles but the programme will be scrutinised for value for money There will be a referendum on moving to the Alternative Vote system and enhanced "pupil premium" for deprived children as Lib Dems demanded

The Lib Dem parliamentary party and its federal executive endorsed the coalition agreement by the required three-quarters majority at a meeting that broke up just after midnight.

Speaking minutes later, Mr Clegg said: "I hope this is the start of the new politics I have always believed in – diverse, plural, where politicians of different persuasions come together, overcome their differences in order to deliver good government for the sake of the whole country."

He acknowledged there would be "glitches" and, in a message to Lib Dem voters, he added: "I can imagine this evening you’ll be having many questions, maybe many doubts, about this new governing arrangement.

"But I want to assure you that I wouldn’t have entered into this agreement unless I was genuinely convinced that it offers a unique opportunity to deliver the kind of changes you and I believe in.

"So I hope you’ll keep faith with us, I hope you will let us prove to you that we can serve you and this country with humility, with fairness at the heart of everything we do, and with total dedication to the interests and livelihoods of everyone in Great Britain."

The Tory leader, who is six months younger than Tony Blair was when he entered Downing Street in 1997, is the youngest prime minister since 1812 and the first Old Etonian to hold the office since the early 1960s.

Barack Obama was the first foreign leader to congratulate Mr Cameron in a brief telephone call during which the US president invited the new prime minister to visit Washington in the summer, Downing Street said.

In a speech outside his new Downing Street home, after travelling to Buckingham Palace to formally accept the Queen’s request to form the next government, Mr Cameron paid tribute to Gordon Brown for his long years of public service.

He also pledged to tackle Britain’s "pressing problems" – the deficit, social problems and to "rebuild trust in our political system".

He said he aimed to "help build a more responsible society here in Britain… those who can should and those who can’t, we will always help. I want to make sure that my government always looks after the elderly, the frail, the poorest in our country.

"We must take everyone through with us on some of the difficult decisions we have ahead.

"I came into politics because I love this country, I think its best days still lie ahead and I believe deeply in public service.

"I think the service our country needs right now is to face up to our big challenges, to confront our problems, take difficult decisions, lead people through those decisions, so that together we can reach better times ahead."

Earlier the Lib Dems said talks with Labour had failed because "the Labour Party never took seriously the prospects of forming a progressive, reforming government". 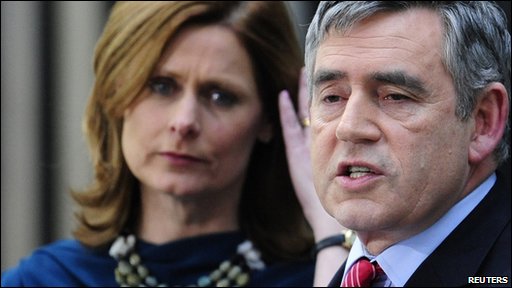 However, Labour’s Lord Mandelson told the BBC they had been "up for" a deal, but the Lib Dems had "created so many barriers and obstacles that perhaps they thought their interests lay on the Tory side, on the Conservative side, rather than the progressive side".

After it became clear the talks had failed, Mr Brown tendered his resignation and said he wished the next prime minister well.

In a resignation statement in Downing Street, Mr Brown said it had been a privilege to serve "this country I love".

Mr Brown had announced on Monday that he would step down as Labour leader by September.

Former Labour minister Kim Howells was scathing of the Lib Dems, and said he was glad his party had not done a deal with them.

He said: "I tell you why it’s been rejected by most Labour MPs – because they know that they’re [the Liberal Democrats] a bunch of opportunistic toerags, who’ll say anything to anyone in order to get power. And they’ve done it this time, they’ve got power."