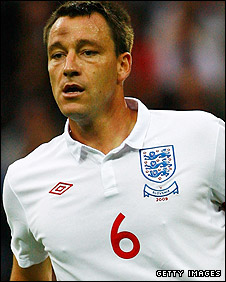 England and Chelsea defender John Terry has been taken to hospital for a scan on his right foot – less than a month before the start of the World Cup.

The 29-year-old suffered the injury in training for Saturday’s FA Cup final at Wembley against Portsmouth, where he was expected to captain the side.

Chelsea added they expected to receive the results of a scan on Thursday.

If Terry were sidelined for any length of time, it would be a major problem for Capello.

Ferdinand, who replaced Terry as England captain, has had an injury-plagued season, and his Manchester United colleague striker Wayne Rooney suffered ankle trouble towards the end of the domestic season.

Manchester City midfielder Gareth Barry is England’s biggest concern after being sidelined for four weeks with ankle ligament damage, while David Beckham misses the tournament altogether because of an Achilles injury sustained in March.