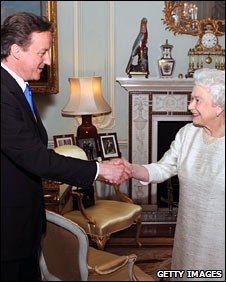 Conservative leader David Cameron is the new UK prime minister after the resignation of Gordon Brown.

Mr Cameron, 43, is in Downing Street after travelling to Buckingham Palace to formally accept the Queen’s request to form the next government.

He said he aimed to form a "proper and full coalition" with the Lib Dems to provide "strong, stable government".

His party won the most seats in the UK general election last week, but not an overall majority.

In a speech at Downing Street, Mr Cameron said he and Lib Dem leader Nick Clegg would "put aside party differences and work hard for the common good and the national interest".

He paid tribute to outgoing PM Gordon Brown for his long years of public service and said he would tackle Britain’s "pressing problems" – the deficit, social problems and reforming the political system.

Mr Cameron stressed there would be "difficult decisions" but said he wanted to take people through them to reach "better times ahead".

The Conservatives have been in days of negotiations with the Lib Dems – who were also negotiating with Labour – after the UK election resulted in a hung parliament.

But the Lib Dems said talks with Labour failed because "the Labour Party never took seriously the prospects of forming a progressive, reforming government".

A spokesman said key members of the Labour team "gave every impression of wanting the process to fail" and the party had made "no attempt at all" to agree a common approach on issues like schools funding and tax reform.

"Certain key Labour cabinet ministers were determined to undermine any agreement by holding out on policy issues and suggesting that Labour would not deliver on proportional representation and might not marshal the votes to secure even the most modest form of electoral reform," he said.

However Labour’s Lord Mandelson told the BBC they had been "up for" a deal with the Lib Dems, but they had "created so many barriers and obstacles that perhaps they thought their interests lay on the Tory side, on the Conservative side, rather than the progressive side".

After it became clear the talks had failed, Mr Brown tendered his resignation and said he wished the next prime minister well.

In an emotional resignation statement outside Number Ten, Mr Brown thanked his staff, his wife Sarah and their children, who joined the couple as they left for Buckingham Palace.

Mr Brown said it had been "a privilege to serve" adding: "I loved the job not for its prestige, its titles and its ceremony – which I do not love at all. No, I loved the job for its potential to make this country I love fairer, more tolerant, more green, more democratic, more prosperous and more just – truly a greater Britain."

He also paid tribute to the courage of the armed forces, adding: "I will never forget all those who have died in honour and whose families today live in grief."

Later he thanked Labour activists and MPs for all their efforts and told them Labour’s general election performance was "my fault, and my fault alone".

The Lib Dem and Conservative teams met for hours of negotiations at the Cabinet Office on Tuesday – four days after the UK general election resulted in a hung parliament.

The talks resumed after Lib Dem negotiators met a Labour team, which followed Mr Brown’s announcement on Monday that he would step down as Labour leader by September.

But there were signs throughout the afternoon that the two parties – who together would still not command an overall majority in the House of Commons – would not reach a deal.

Several senior Labour figures, including John Reid and David Blunkett, warned against a coalition with the Lib Dems, particularly if the price involved offering them a referendum on changing the voting system to proportional representation.

After Mr Brown announced he would be stepping down and would see if Labour could do a deal with the Liberal Democrats, the Conservatives upped their offer to a promise of a referendum on changing the voting system from existing first past the post system to AV.