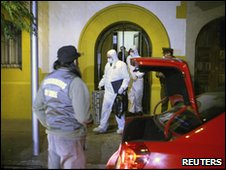 A Pakistani man is being questioned after he tested positive for explosives while entering the US embassy in Chile.

Police said Mohammed Saif Ur Rehman, 28, who holds a US visa, was stopped at the embassy in the capital Santiago on Monday.

Prosecutors said he had traces of explosives on his hands, mobile phone, bag and ID.

The arrest came days after a Pakistani-born American was charged with an attempted bombing in New York.

Mr Rehman was taken into custody while police searched his student lodgings.

Local media said he arrived in Chile in January to study tourism.

US ambassador Paul Simon told Chilean radio he did not think the man had been tying to attack the embassy, as only traces of explosives were detected on him.

US state department spokesman PJ Crowley said the US had had information about Mr Rehman and he had been called into the embassy to clarify it.

Mr Crowley said he was not aware of any connection with the attempt to plot Times Square in New York.

Although Mr Rehman has been handed over to the Chilean authorities Mr Crowley said this did not mean US was no longer interested in him.

The US embassy in Santiago has been targeted before. It was sent a letter bomb in 2001, shortly after the 9/11 attacks.

The bomb was defused and a Chilean man was sentenced to 10 years in prison for the attack.