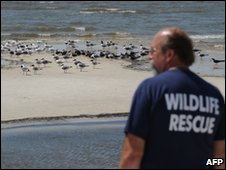 Firms in the Gulf of Mexico oil disaster are set to present conflicting claims at the first US Senate hearing, US media say, citing leaked testimony.

BP intends to tell the Senate that the spill was due to the failure of safety equipment owned by drilling company Transocean, the reports say.

Transocean is expected to blame the spill on the failure of a cement wall built by a firm contracted by BP.

Meanwhile BP says it will try to place a new dome over the blown-out well.

An attempt to drop a huge dome on the gushing well failed at the weekend, and BP is now working on lowering a smaller device known as a "top-hat" dome on to the well.

The BBC’s Rajesh Mirchandani in Alabama says there are also reports it is exploring plugging the well with debris, including every day rubbish like tyres and golf balls.

The growing slick is threatening an environmental disaster along the US coast.

As executives prepared for the Senate hearing, White House spokesman Robert Gibbs reiterated the US government’s views on responsibility for the slick.

"BP will be paying for all costs of stopping the spill and cleaning it up, and we will aggressively pursue full compensation for damages," he said in a statement.

US media, including the Associated Press and Wall Street Journal, quoted leaked statements they said senior executives would be giving in testimony to the Senate later.

According to the reports, Lamar McKay, head of BP America, will blame the spill on the failure of Transocean’s "blowout preventer" – a series of valves designed to stop oil from escaping.

But Transocean’s chief executive Steven Newman is expected to point the finger at BP.

"All offshore oil and gas production projects begin and end with the operator, in this case BP," the Associated Press quoted a leaked statement of his testimony as saying.

He will say BP’s contractor Halliburton was responsible for encasing the well in cement and ensuring the cement’s integrity.

Halliburton executive Tim Probert is expected to argue that his firm followed all rules and guidelines.

Dow Jones Newswires said it had received testimony from an oil-drilling expert that will tell the Senate that human error may have created the conditions for the disaster, despite the safety measures.

Some 5,000 barrels of oil have been flowing into the sea every day since the leak began late last month.

BP and US officials have been combating the slick on several fronts – spraying chemical dispersants on the oil and manufacturing huge contraptions to drop on to the leaking well.

Booms and bundles of absorbent material have been laid along shorelines to try to protect them.

But the broken pipe is almost one mile (1.6km) below the ocean’s surface, with little visibility for engineers using remote-controlled vehicles.

And the slick has so far thwarted all efforts to bring it under control.

A sheen from the edge of the slick is surrounding island nature reserves off Louisiana and tar balls have reached as far as the Alabama coast.

The low-lying region contains vital spawning grounds for fish, shrimp and crabs and is an important migratory stop for many species of rare birds.