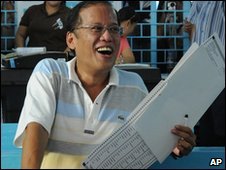 Manny Villar congratulated Mr Aquino on his victory, but no official word has yet emerged from Joseph Estrada’s team.

The Commission on Elections said Mr Aquino, son of two democracy icons, had about 40% of the vote, and Mr Estrada about 25%, with most districts counted.

A high turnout was recorded despite big delays caused by new voting machines.

Millions of Filipinos have been voting for a president, vice-president and more than 17,000 other official posts.

Voting has been marred by the deaths of at least 12 people in political violence, after a bloody campaign period in which more than 30 people died. Another 57 died in a mass killing in November.

In the latest reported violence, the AFP news agency said communist insurgents had ambushed an election convoy in the south of the country, killing six people and wounding 12.

Fears of widespread chaos resulting from the use of new automated voting machines failed to materialise.

The new machines did cause massive delays but voters waited patiently for hours in the heat to vote.

Vote counting appeared to be proceeding more smoothly than in past polls.

Mr Estrada had about 25.76% of the vote, said Comelec chair Jose Melo, with Mr Villar, a property trycoon, trailing in third with just under 14%.

"I congratulate Senator Noynoy Aquino for his victory."

Local television quoted a lawyer for Mr Estrada as saying that his team would probably seek to contest the results.

Mr Melo said that about 75% of the more than 50 million registered voters in the country had cast a ballot.

"You know early in the morning there were a lot of problems being reported, but as the day wore on we were getting all sorts of good reports about problems being solved, and problems not being as bad as they were initially reported, and now this, transmission going as fast, twice as fast as we expected, it makes for a roller coaster ride," he said.

Mr Aquino had been the pre-election favourite.

Correspondents say the 50-year-old’s political pedigree – as the son of the beloved former president – has been the secret of his success.

He is considered honest and well-intentioned despite his less than luminary career as a legislator.

A key task ahead, analysts say, is for him to take action against the corruption which is seen as endemic in the highest institutions of state and business.