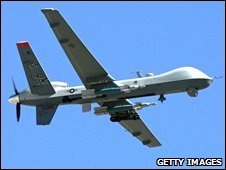 At least four suspected militants have been killed by an unmanned US drone in Pakistan’s tribal region of North Waziristan, local officials say.

The plane fired missiles at an alleged hideout some 30km (20 miles) from the region’s main town, Miranshah.

The US has stepped up pressure on Pakistan’s government since linking a failed car bombing in New York to the Pakistani Taliban.

North Waziristan has been the focus of dozens of drone attacks since 2008.

The strikes have proved controversial, with hundreds of people including civilians being killed.

An unnamed Pakistani security official told the AFP news agency that five US drones had fired into the compound early on Tuesday.

"They targeted a compound and vehicles parked outside the house," the official said.

The US has recently stepped up drone attacks in North and South Waziristan, where they believe many al-Qaeda and Taliban fighters find shelter.

Over the past 18 months, Pakistan has publicly criticised drone attacks saying they fuel support for militants.

But observers say the authorities privately condone the strikes.