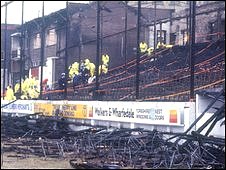 Memorial services are taking place later to mark the 25th anniversary of the fire at Bradford City’s Valley Parade stadium in which 56 people died.

Hundreds of people are set to gather in the city’s Centenary Square at 1100 BST for a service involving the Archbishop of York and the Bishop of Bradford.

Civic leaders from Bradford and Lincoln – the club’s opponents on 11 May 1985 – will be among those at the service.

City Hall flags will fly at half mast and a one-minute silence will be held.

Bradford Cathedral is then due to host a service for the victims’ relatives and friends at 1930 BST.

During the day of remembrance, a new stone street marker commemorating the tragedy will be installed at the junction of Manningham Lane and Hamm Strasse, a street named after Bradford’s twin city in Germany.

In 1985, the then Lord Mayor of Hamm, Sabine Zech, was at the match while on a civic visit.

The stone will have a granite plaque bearing the date of the fire and the crests of the two cities and Bradford City football club.

The fire also left more than 200 people injured, many with serious burns.

As a result, the University of Bradford set up its Plastic Surgery and Burns Research Unit in the wake of the tragedy.

On Tuesday, the university is to launch the UK’s largest academic research centre in skin sciences, bringing together in one unit expertise spanning pharmacology, biology, chemistry, biochemistry, physics, and medicine.