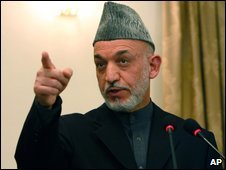 Afghanistan President Hamid Karzai has arrived in the US for four days of talks aimed at repairing rocky relations between Kabul and Washington.

US envoy to Afghanistan Karl Eikenberry said he believed the visit would leave the two nations "well aligned".

While the Afghan leader is expected to focus on civilians being killed by foreign troops, US officials are likely to tackle Mr Karzai on corruption.

He is scheduled to meet President Barack Obama on Wednesday.

But the BBC’s state department correspondent Kim Ghattas says the US has rolled out the red carpet for Mr Karzai’s visit.

"What measures true partnership is the ability, when the stakes are as high as they are for Afghanistan and the US, to be able to work our way through difficulties," he said.

Gen Stanley McChrystal, the top US commander in Afghanistan, insisted he had a good relationship with Mr Karzai.

"I think it’s important that I have an effective, candid, responsible relationship. And I’ve been real happy with it thus far," he told reporters.

As well as holding three hours of talks with Mr Obama, the Afghan leader is also scheduled to meet Secretary of State Hillary Clinton and Defence Secretary Robert Gates.

The trip comes at a crucial time for Afghanistan.

Nato is preparing for an assault in southern Kandahar province, and Afghan officials are set for a forthcoming meeting of tribal leaders who will discuss how to promote peace.

The US hopes to start pulling out troops from July 2011, but the country has seen a marked increase in violence over the past year.