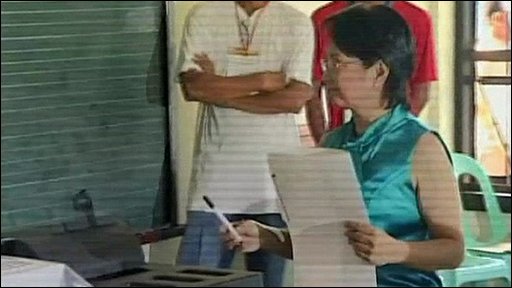 Four people have been killed as polls opened in local and national elections in the Philippines, after three months of intense campaigning.

Voters will elect a new president and vice-president, as well as more than 17,000 other positions.

Dozens of people were killed during an intense three-month campaign.

The security forces are patrolling to try to prevent more bloodshed.

A military spokesman said three people were shot dead and 10 others wounded when police clashed with supporters of a mayoral candidate in the southern province of Zamboanga Sibugay before dawn.

A cousin of the vice governor in North Cotabato province was shot dead while riding on a motorbike in a separate incident, local police said.

The latest deaths bring the toll over four months leading into the elections to 33 dead.

Those deaths are in addition to the 57 people killed in Maguindanao province in November when a group was trying to register candidacies for these elections in an area held by the rival Ampatuan clan.

Twelve members of the Amapatuan clan have been charged with involvement in the mass killing, but 10 of them are running for posts in these polls, as they remain innocent until proven guilty in court.

The BBC’s Philippines correspondent Kate McGeown is at the Nemesio Yabut elementary school in the capital, Manila, and says long lines have formed where hundreds of people who are waiting for a chance to vote.

She says some people have already been waiting for hours in the sticky heat but everyone still seems to be in high spirits.

People take elections seriously in the Philippines – an estimated 85% of those eligible are expected to vote. 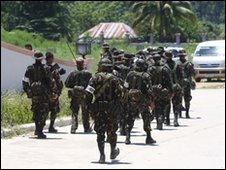 Even the election front-runner, Mr Aquino, had trouble voting at his home province of Tarlac because the ballot-counting machine had broken down.

"Hopefully, this is just an isolated incident. We are waiting for more reports… (but) if people can’t vote because the machines don’t accept their ballots, then certainly that is a problem," Mr Aquino said.

Throughout the campaign the issue that has also been dominating the headlines is the automated voting machines that will be used for the first time in this election.

Our correspondent says there are fears of what might happen if something goes wrong with the machines.