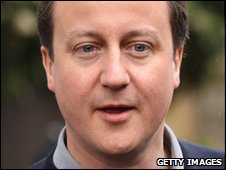 Senior Conservatives and Liberal Democrats are due to resume talks on forming a government.

On Sunday negotiating teams spent six hours in "very positive and productive" talks and the party leaders had a 45-minute face-to-face discussion.

The Tories said they and the Lib Dems were "discussing specific proposals" and both sides said economic stability would be key to any agreement.

Mr Brown has offered the Lib Dems talks if no agreement is reached with the Conservatives.

The prime minister and Mr Clegg met at the Foreign Office, after Mr Brown arrived back at Downing Street on Sunday afternoon from his home in Scotland.

A Downing Street spokesman told the BBC it had been an "amicable discussion".

Mr Cameron was aware of the meeting.

They will resume talks on Monday, and Conservative MPs are due to meet later in the day.

The Tories won the most votes and MPs in Thursday’s election, but are short of a majority and are seeking support from the Lib Dems to form a government.

BBC political editor Nick Robinson said of the Tory-Lib Dem negotiations: "They are not merely going through the motions. There are real and substantial talks."

He said it was "make your mind up time for Nick Clegg and the Lib Dems", adding that they "have to do it pretty soon". 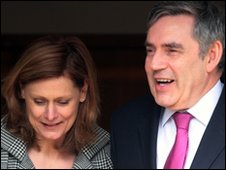 On Sunday, emerging from the Cabinet Office after a day of talks, Mr Hague said: "The issues that we have covered have included political reform, economic issues and reduction of the deficit, banking reform, civil liberties, environmental issues."

He added that both sides "agreed that a central part of any agreement that we make will be economic stability and the reduction of the budget deficit".

Minutes later, Mr Alexander also made a brief statement, describing the talks as wide-ranging and "good", and also emphasising that deficit reduction was important.

Speaking on Sunday before the talks Nick Clegg said: "I’m very keen the Liberal Democrats should play a constructive role at a time of great economic uncertainty to provide a good government that this country deserves.

"Throughout that we will continue to be guided by the big changes we want."

The Lib Dem leader has said the Conservatives, as the biggest party, have the right to seek to form a government first.

They have met the Tory team three times, assisted by civil servants as agreed in the arrangements for a hung parliament.

Mr Cameron and Mr Clegg first met for face-to-face talks over a possible coalition on Saturday and discussed it again by phone a day later.

Former Lib Dem leader Lord Ashdown said it was important that the party talked to the Conservatives at the same time as "listening to Labour".

"The central proposition is: what combination serves the nation’s interests in providing stable, long-term stability in order to tackle the crisis?" he said.

And in an e-mail to Labour activists the prime minister thanked them for their work throughout the election."The past few days have seen us enter a political landscape not considered possible a few short weeks ago – with the outcome of the election leading to no single party able to form a majority government," he wrote.

"My duty as prime minister has been to seek to resolve this situation."

Several Labour backbenchers have called for Mr Brown to step down.

BBC political correspondent Iain Watson said: "Privately the assessment of senior labour sources is that the Liberal Democrats are most likely to reach a deal with the Conservatives which falls short of a formal coalition and which would allow David Cameron to govern without a majority.

"However they are encouraged that some very senior Liberal Democrats are highly sceptical about reaching any accommodation with the Conservatives and feel the space has opened up for the possibility of an alternative deal with Labour."

The Tories secured 306 of the 649 constituencies contested on 6 May. It leaves the party short of the 326 MPs needed for an outright majority.

The Thirsk and Malton seat – where the election was postponed after the death of a candidate – is still to vote.

If Labour and the Lib Dems joined forces, they would still not be the largest grouping. With the support of the Northern Irish SDLP, one Alliance MP, and nationalists from Scotland and Wales they would reach 330, rising to 338 if the DUP, the independent unionist and the new Green MP joined them.

What’s your reaction to a possible coalition? Send us your comments.