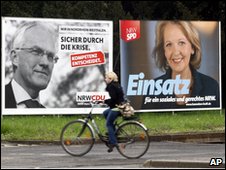 Voters in Germany’s most populous state, North Rhine-Westphalia (NRW), are voting in a regional election that could change national politics.

A defeat for Chancellor Angela Merkel’s conservatives and their liberal allies would end the coalition’s majority in the upper house of parliament.

The campaign has been overshadowed by the government’s decision to contribute to a huge rescue package for Greece.

Meanwhile many cities in NRW are on the brink of bankruptcy.

Angela Merkel is not standing in this regional election, but she has campaigned here until the last minute.

It is the first political test for her centre-right coalition since it came to power six months ago.

North Rhine-Westphalia matters: home to 18 million people, it is Germany’s industrial heartland and a weathervane for national politics. 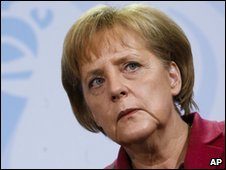 The regional coalition between Chancellor Merkel’s conservatives and the pro-business Liberal-Democrats, which mirrors the one at the federal level, is struggling.

With the economic crisis dominating the campaign, Mrs Merkel tried to delay a decision on the hugely unpopular rescue package for Greece until after the poll, but failed.

Meanwhile, local councils are sinking into debt. Kindergarten fees have gone up, libraries and swimming-pools are closing. In Wuppertal, even the theatre is under threat.

Scandals about party financing may also prompt voters to punish the centre-right in NRW and revive the fortunes of the Social-Democrats, the Greens and the former communist Left Party.

A new coalition here would also spell the end for Chancellor Merkel’s majority in the upper house of parliament, the Bundesrat, jeopardising long-promised tax cuts and health system reforms.

Europe’s biggest economy could enter a phase of political uncertainty it can ill afford.