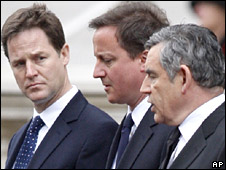 Senior Conservatives and Liberal Democrats are to hold more talks about the possibility of their parties forming a new government.

Conservative and Lib Dem negotiators will meet at 1100 BST – after leaders David Cameron and Nick Clegg met on Saturday for private 70-minute talks.

There will also be a meeting of Conservative MPs at 1800 BST on Monday, the BBC understands.

The Tories won the most election votes and MPs but are short of a majority.

Gordon Brown remains prime minister and has offered the Lib Dems talks if no deal is reached with the Conservatives.

A Lib Dem spokesman said Mr Clegg and Mr Brown spoke by telephone on Saturday night at the prime minister’s request, describing the conversation as "amicable".

In an e-mail message to supporters, the Conservative leader said he would not be "rushed into any agreement" but may be able to give "ground" in some areas.

The Tory leader said he would stand firm on his pledges not "to give more powers to Brussels, be weak on immigration or put the country’s defences at risk".

But he added that, in the "national interest", the Conservative Party may be able to give ground in areas such as the Lib Dem manifesto plan to reduce taxes on the lowest paid and hoped for a "similarly constructive approach from the Liberal Democrats".

There was no direct reference to the Lib Dem desire for a referendum on voting reform, although on Friday Mr Cameron offered an "all party committee of inquiry on political and electoral reform".

The talks between Mr Cameron and Mr Clegg at Admiralty House in Westminster, on Saturday night, were described by both sides as "constructive and amicable" and followed an earlier brief conversation at the VE day commemoration event in London.

BBC political editor Nick Robinson said: "They will have been working out whether there is any room there on which they can meet which would allow them to both satisfy their supporters and have some sort of stable coalition or arrangement."

Our correspondent added that some "very senior Liberal Democrats" were urging their party leader to "talk to Gordon Brown".

Earlier, Mr Clegg discussed the Tory power-sharing offer with his party, the leadership of which has "endorsed in full" his decision to talk to the Tories first.

The Lib Dem leader said the Conservatives, as the biggest party, had the right to seek to form a government first.

Meanwhile, Labour frontbencher Peter Hain said it was "clear" that the Lib Dem leader and Mr Brown had "a lot in common" on the need for electoral reform – Labour has offered a referendum on changing the voting system.

But Labour backbencher John Mann called for Mr Brown to step down as Labour leader before the party conference in September – arguing his position "rules out the credibility of a Lib/Lab pact".

Similarly, Labour MP and former sports minister Kate Hoey told BBC Radio 5 live she could not see how Mr Brown could "continue as prime minister in any kind of coalition" because "he wasn’t elected originally" and had now "lost over 100 MPs".

The Tories secured 306 of the 649 constituencies contested on 6 May. It leaves the party just short of the 326 MPs needed for an outright majority, with the Thirsk and Malton seat – where the election was postponed after the death of a candidate – still to vote.

The poll of more than 1,400 voters found people think he should have admitted defeat on Friday, rather than hanging on in case the Conservatives cannot come to a deal with the Liberal Democrats.