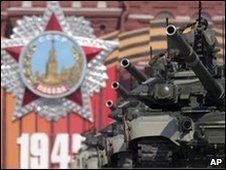 Troops from four Nato countries have marched for the first time in Russia’s annual parade to mark victory in WWII.

Soldiers from Britain, France, Poland and the US marched alongside Russian troops through Moscow’s Red Square.

Along with 10,000 Russian troops, the parade also included tanks, ballistic missiles and a fly-past of 127 aircraft.

It was the largest display of Russia’s military hardware since the collapse of the Soviet Union, the BBC’s Richard Galpin in Moscow reports.

Russian President Dmitry Medvedev said in a speech that the lessons of World War II "urge us to show solidarity".

"Peace is still fragile and it is our duty to remember that wars do not start in an instant… it is only together that we shall be able to counter modern threats."

The presence of foreign troops in Red Square – once the heart of the Soviet Union – was a highly symbolic gesture, our correspondent says, demonstrating how far the rivalry of the Cold War has been pushed aside.

France was represented at the parade by the Normandie-Niemen squadron; the US by a detachment from the 2nd Battalion, 18th Regiment; and Poland by 75 service personnel representing the Polish army, air force and navy, the AFP reports.

One member told the BBC they were excited to be taking part as it was important that former allied forces that defeated the Nazis during WWII should be together on the 65th anniversary of the ending of the war.

However, there was no senior British figure among the world leaders that gathered to watch the parade.

A reliable source confirmed to the BBC that the Russian government rejected an offer for Prince Charles to attend, although it is not clear why, our correspondent reports.

French President Nicolas Sarkozy and Italian President Silvio Berlusconi cancelled their visits in order to attend to the crisis surrounding the euro currency.

Western allies mark Victory in Europe Day every year on 8 May, but Russia celebrates the event a day later as it was 9 May in Moscow when the Nazi surrender came into force.