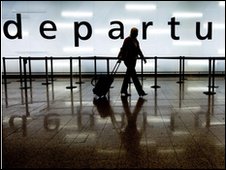 British air passengers could be facing further disruption from a volcanic ash cloud that has continued to affect European flight schedules.

Many flights to Spain, France and Portugal were grounded on Saturday, and some Scottish island flights were hit.

The Met Office said weather patterns were expected to change, possibly bringing the ash cloud back into parts of UK airspace on Sunday and next week.

The ash closed 16 Spanish airports on Saturday, including hub Barcelona.

A no-fly zone also affected Stornoway on Lewis and Benbecula in the Outer Hebrides, as well as some Loganair services to Orkney and Shetland.

The disruption could continue into next week if northerly winds bring ash over western Scotland and Ireland.

On Saturday evening Ryanair said it expected airspace over Italy’s Milan Bergamo airport and Porto, in Portugal, to be closed or restricted on Sunday morning, and listed a number of flights it may cancel.

Earlier Ryanair had cancelled Saturday’s flights to and from destinations including Spain, Portugal and France.

At London Stansted Airport, 22 Ryanair flights to the Canary Islands, mainland Spain and Portugal were cancelled, along with three EasyJet flights.

Flights from Gatwick to Portugal, Alicante and Madrid were cancelled and at Heathrow some flights to La Coruna in northern Spain were also grounded.

It urged passengers to check details of their flights before travelling to the airport.

Most flights between Europe and North America are being diverted because of the ash cloud’s location, officials at European air traffic agency Eurocontrol said.

On Saturday the Met Office said the ash was still to the west of the UK.

"The ash cloud has drifted across parts of southwest Europe, leading to disruption.

"Later in the weekend weather patterns are set to change and may bring the ash cloud back into parts of UK airspace toward the end of the weekend and into next week."

The volcano has become more active in recent days and flights are being re-routed north and south of the 1,200 mile (2,000km) long cloud.

On Saturday passengers at Heathrow Airport were told to expect delays of between 10 to 15 minutes to allow time to fly around the ash cloud.

But a spokesman for the airport said that disruption to European services was minimal, with only a small number of flights going to La Coruna affected.

Recent images have shown activity in the Eyjafjallajokull volcano intensifying.