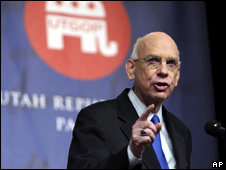 The conservative Tea Party movement in the US has blocked a three-term Republican senator from Utah, Bob Bennett, in his bid for re-election.

The two challengers, one backed by the Tea Party, will face each other in a primary next month for the right to contest November’s Midterm elections.

It is the first major victory for the grassroots movement that objects to big government and opposes high spending.

"The political atmosphere obviously has been toxic and it’s very clear that some of the votes that I have cast have added to the toxic environment," he told reporters after Saturday’s convention vote.

"Looking back on them, with one or two very minor exceptions, I wouldn’t have cast any of them any differently even if I had known at the time they were going to cost me my career."

Sen Bennett is barred by state law from running as an independent, but he has not ruled out standing as a write-in candidate – whose name does not appear on the ballot and so must be written on the ballot by the voters.

"I do think I still have a lot of juice left in me," he added.

The two candidates in June’s primary, businessman Tim Bridgewater and Tea Party-bakced lawyer Mike Lee, both claimed during the campaign that they were better suited to rein in government spending than Sen Bennett.

"There is a mood that has swept across this country and has certainly swept across Utah that is demanding a new generation of leaders. Leaders committed to constitutionally limited government," Mr Lee told the Reuters news agency.

Correspondents say the winner of the Republican nomination is all but guaranteed victory in November because Utah is so conservative.