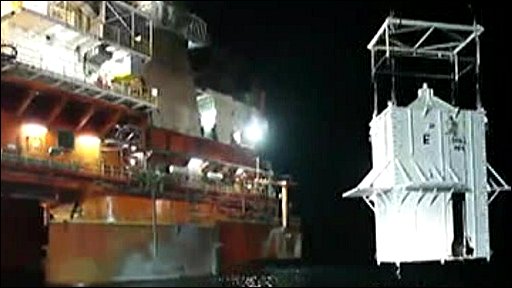 The oil company, BP, has encountered problems with the containment device it is trying to put over a blown-out well on the seabed of the Gulf of Mexico.

Chief operating officer Doug Suttles said the 98-tonne concrete-and-steel box had to be moved, after ice-like crystals began accumulating inside it.

He said BP’s engineers hoped they could find a solution to the problem.

The aim is to contain as much as 85% of the escaping oil and then funnel it into a waiting tanker on the surface.

US officials have closed the Breton National Wildlife Refuge to the public after the slick caused by the leak reached islands off Louisiana.

Rescued workers who were on the rig earlier described how a bubble of methane gas escaped from the well and expanded as it shot up the drill column before exploding. Some complained that safety devices had not worked.

Another, Dwayne Martinez, stated: "[There were] no kind of alarms. We didn’t hear any kind of alarms until there was one explosion."

Although the rig was operated by Transocean, it was leased by BP, which is responsible for cleaning the 3 million gallons that have so far leaked, creating a slick covering about 2,000 sq miles (5,200 sq km).

The company hopes the 98-tonne containment device, once operational, will allow it to collect oil leaking out of the well while it attempts to stop the leak altogether by drilling relief wells nearby.

On Friday, remote-controlled submersibles guided the 40ft (12m) funnel above the wellhead, 5,000 ft (1,500m) below the surface. The technology has only ever been used a few times in shallow waters.

BP initially said everything appeared to be going as planned, but on Saturday it said flammable gas hydrates – crystalline water-based solids physically resembling ice – had accumulated inside the device.

"As we were placing the dome over the leak source a large volume of hydrates formed inside the top of the dome, requiring us to move the dome to the side of the leak point," Mr Suttles told reporters in Robert, Louisiana.

"The dome is currently sitting on the seabed while we evaluate options to deal with the hydrate issue. We believe that it’ll probably take the next two days to look for opportunities to overcome this challenge."

These could include using hot water to heat up the hydrates at the ocean floor, or using hydrocarbons like methanol to thin them out.

"I wouldn’t say it’s failed yet," Mr Suttles added. "What I would say is what we attempted to do last night didn’t work." 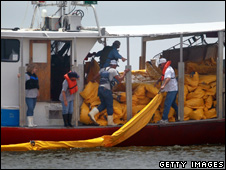 If the funnel fails to work, BP faces the prospect of drilling a relief well nearby to cut off the leaky oil well, which could take two to three months.

In the meantime, residents of Louisiana, Mississippi, Alabama, and Florida await news of when the massive oil slick will reach their shores.

A sheen of oil began arriving on barrier islands off the coast of Louisiana last week, and crews have been laying inflatable booms, spraying chemical dispersants and setting fire to the slick to try to keep it from coming ashore.

The US Coast Guard and BP said on Saturday that about 2.1 million gallons of an oil-water mix had been collected, about 10% of which was oil.

Fears are growing that sea life may have been severely affected in the area, which includes vital spawning grounds for fish, shrimp and crabs.

Some environmentalists are calling for a ban on offshore drilling.

Are you in the area? Have you been affected by the oil spill? You can send us your views and experiences Click here to add comments.: