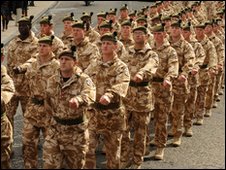 Soldiers who served in Afghanistan will march down Edinburgh’s Royal Mile to thank the public for their support.

Soldiers will then be presented with their operational service medals at Redford Barracks.

The Edinburgh-based troops were deployed to Helmand Province in October 2009.

During the six-month tour the battlegroup, made up of 3 Rifles and B Company of 1 Scots, lost 30 members.

The troops will march from the esplanade of Edinburgh Castle to the Palace of Holyroodhouse, past some bereaved families and injured colleagues who are unable to march.

Thousands of people lined the streets of the city on Friday as the battlegroup paid tribute to their comrades who had been killed while serving in Afghanistan.

More than 400 soldiers marched from Redford Barracks to a memorial service in Colinton Parish Church, accompanied by the Band and Bugles of the Rifles and the Band of the Royal Regiment of Scotland.

Some of the soldiers bore injuries suffered while fighting in Afghanistan.

A memorial at Redford Barracks has also been dedicated to soldiers killed while serving in Afghanistan.