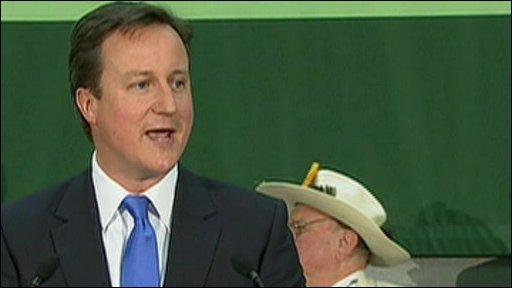 Conservative leader David Cameron has said it is clear Labour has lost its mandate to govern the country.

Speaking after holding his Witney seat, he said his party was "ready to bring strong, stable, decisive leadership to our country".

Mr Cameron held Witney with 33,973 votes, an increased majority and a 6.3% swing from the Liberal Democrats.

He said the national election result was not yet clear, but the change people wanted required new leadership.

He said: "Nationally we have to wait for the full results to come out, but I believe it is already clear that the Labour Government has lost its mandate to govern our country."

He said it looked likely the Conservatives may win more seats than it had for 80 years, but admitted the result was yet to come.

"Whatever happens tonight we will stand ready to do all that we can to help bring that leadership, to help bring strong, stable, decisive and good government for our country."

"What will guide me in the hours ahead… will be the national interest – to do what is right for our country, to make sure we have that government, have that stability, take the right decisions.

"We live in difficult times but this is a great country and we will come through them and be stronger."

As results painted a complex picture of contrasting electoral swings in constituencies across the country BBC political editor Nick Robinson said there a "real sense of uncertainty" in what Mr Cameron said.