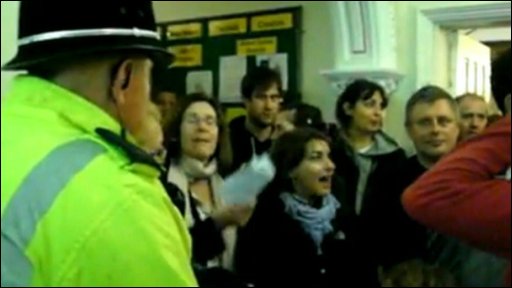 Hundreds of voters have been turned away at a number of polling stations across the country, as people struggled to vote before polls closed at 2200 BST in the UK general election.

Many voters were left frustrated at polling stations in areas in Manchester, London, Sheffield and Liverpool.

Here’s a summary of voters’ stories so far: 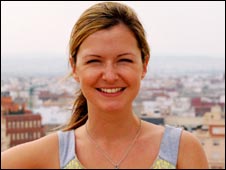 I, along with about 100 other people, were turned away from our local polling station, having waited 45 minutes to vote.

The officers closed the door on the queue at 9.50pm, refusing entry to anyone standing outside.

Only two officers were on duty, a disgrace given the anticipated high turnout.

They also told us we should have posted our votes!

When we refused to leave, the police were called.

People were calling the town hall to complain but they said they were being quite rude to them.

I don’t think anyone could really believe it was happening.

There was a woman beside us who said she had been living in the area for more than 10 years and had never seen as many people turning out to vote.

People were frustrated and could not understand how they could be so ill-equipped to handle the number of voters turning out.

I am very unhappy.

It is an outrage in a civilised country like ours that this can happen, especially to people who are trying to vote after doing a day’s work.

Whether it will affect the vote, I don’t know, but the election cannot stand, given the number of voters potentially unable to vote this evening.

I’m fuming. I queued for over an hour and had the doors shut on me, along with about 250 others, at 10pm.

We initially went at 6pm, but it was too busy so we went back an hour later, but there were still big queues.

We went back at 9pm but after waiting for an hour, we still couldn’t vote.

Manchester City council obviously underestimated how many people would turn out to vote in this election.

There were only two people on duty at the polling station and just one person handing out ballot papers. 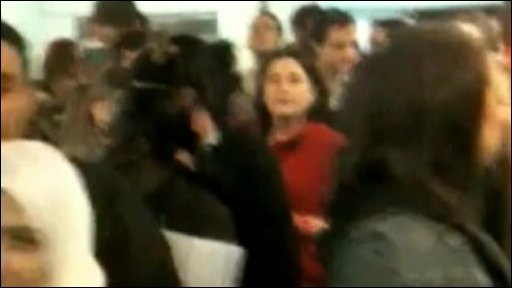 Nobody would tell us what was going on, the word only came back to us via word of mouth down the queue.

One policewoman turned up to try and calm people down, as people were getting irate and did not want to leave.

I’m so disgusted, as we just live around the corner from the polling station.

In 2005 there were more polling stations open.

I also feel left out, and if the party gets in that I didn’t want, I will feel very disgruntled, particularly with the election being so close.

I am just astounded, I cannot believe it.

I returned from my local polling station, having been denied my right to vote.

I arrived in good time to cast my vote, at 8.30pm, and after queuing for an hour-and-a-half was turned away.

I was inside the polling station, only about three people away from receiving my ballot paper.

There were at least several hundred people in the queue behind me and they were standing there in disbelief.

We stayed until about 11pm and more and more police began arriving. One voter was handing out a petition to gather hundreds of names.

I don’t understand how this can happen.

I can’t believe that in a supposedly civilised and democratic country it is actually possible for a citizen such as myself to be denied the right to vote.

I am appalled by the lack of organisation in our borough and it seems to be a widespread problem.

Surely something has to be done about this.

I have just witnessed a disgraceful three hours in the Sheffield Hallam constituency. 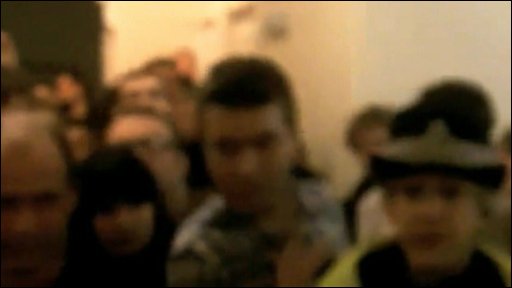 Despite my discussion with the returning officer explaining that the organisation was so poor in one of the polling stations that they could not accommodate many of the voters, he refused to extend the closing time beyond 10pm.

I have heard of other similar scenes in Leeds and Manchester.

This is a reflection, I believe, of a disrespect for voters and a lack of careful planning.

It is not a good day for democracy.

I turned up at the polling station at about 7.30pm vote and was told there were no ballot papers left.

So I waited around before heading home and returning at about 8.30pm.

I was then told they had received a new supply of ballot papers, but ran out again.

I went away again and returned once more at 9.15pm and there was a queue of angry voters outside.

Only 100 new voting forms had arrived but they were the wrong ones, for the local elections.

People were finally turned away at 10pm, not because they were late but because nobody had banked on the mass turnout.

People being refused a vote due to an administration error is not right.

MORE STUDENTS WHO HAVE BEEN AFFECTED

After waiting for two hours outside in the rain I was one of the last people to be admitted into the Sheffield Hallum polling station before they stopped letting people in at about 2200. We remained indoors for 30 minutes before being informed it was a waste of time as we wouldn’t be allowed to vote. Some people in the ballot room began a small protest and there were chants of "I want my vote" in the queue before the police stepped in front of the ballot desk and people slowly departed.

I had been warned off from queuing previously by those that had queued for an average of two-and-a-half hours earlier in the day. It is disappointing. It could have been foreseen if the electoral committee had taken into consideration the 4,000 students in the area that wanted to vote in the election.Benjamin Ashenden, Sheffield Hallum

Two hours standing in the rain is bad enough but when you see people coming down the queue saying "there is a separate queue for residents" then that is wrong. I heard and challenged a woman who said that she should be able to get in first as she "paid all her taxes" and "offered something to society". We are students living in the same area and will be the future of her society and have as much right to say what we believe in as they do. We can’t be treated like this.Michael Winrow, Sheffield

It’s a disgrace that we students are being used as a scapegoat for the ridiculous way in which voting stations managed, or rather failed to manage, their operations. Stop blaming students not taking their polling cards to the polling stations when the polling cards stated that it wasn’t necessary to take them. Get the procedure right and it will be enacted correctly.‘Sailorjack’, Cardiff

I am a student at Sheffield University and managed to vote at Ranmoore polling station after a two-and-a-half hour wait. Students from two student accommodation villages were directed to a polling station with three polling booths and six people working. I don’t think people without polling cards is a valid reason at all for the queues. Will Hardy, Sheffield

Were you turned away from or did you face long queues at your polling station? Send us your comments and pictures.

Send your pictures and videos to [email protected] or text them to 61124. If you have a large file you can upload here.