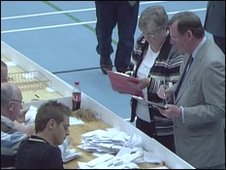 Counting has begun across Northern Ireland in the 2010 General Election with the first results due by midnight.

A total of 18 seats at Westminster are being contested. It is the first time in recent years that counting is to take place overnight in NI.

But in Fermanagh/South Tyrone, where a close contest is expected, the turn-out is over 70%.

The results of a BBC, Sky and ITV exit poll suggest that the Conservatives could be 19 seats short of an overall majority.

Mr Devenport said: "What that means, if true, is that whilst the DUP on their own wouldn’t be able to guarantee anyone a majority, our local MPs could certainly be in the mix.

"That would be either as part of a Unionist plus Scottish and Welsh nationalist group propping up the Conservatives or, alternatively, a similar rainbow coalition propping up a Lib-Lab pact."

Ballot papers will now be collected from 610 locations across Northern Ireland and taken to eight different counting centres. 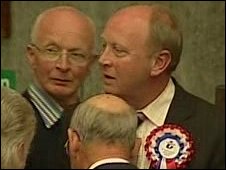 The early stages of the election in Northern Ireland were dominated by talk of unionist pacts.

In Fermanagh and South Tyrone, the unionists decided on one candidate – who is standing as an independent – Rodney Connor.

He will be taking on Sinn Fein MP Michelle Gildernew, the agriculture minister.

In South Belfast, there was also talk of a unionist pact to take the seat from Dr Alasdair McDonnell, SDLP.

This did not happen. But Alex Maskey of Sinn Fein decided to withdraw.

Later, David Cameron’s comments about the size of Northern Ireland’s public sector and the need to grow a bigger private sector sparked fears of deep public sector job cuts, should the Conservatives get into power.

The Conservative leader denied that this was the case and flew into Northern Ireland to underline that.

In recent days, there has been speculation about whether the DUP will have powerful leverage in helping the Tory party form a government.

BBC NI will be live at every count, providing results coverage for BBC TV and radio and for the election website.

The BBC News website will be updated constantly throughout the night and through Friday with the latest developments.