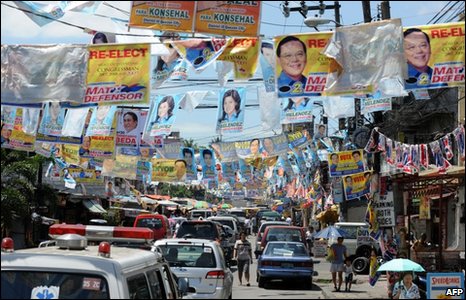 What do a world-champion boxer, a deposed president and a woman renowned for her love of shoes have in common?

They are all candidates in the forthcoming Philippine elections – together with at least 50,000 other people.

Presidential elections here only take place every six years, at the same time as the vote for senators, members of congress and posts in local government, so there are more than 17,000 posts to fill.

An observer could easily be mistaken for thinking this country is hosting one large party in the weeks ahead of the 10 May polls.

Banners and posters cover every street corner, annoyingly catchy campaign tunes blare out from passing vehicles and pop stars make guest appearances at rallies up and down the country.

But the real celebrities are the candidates themselves. At a rally in the city of Cavite, presidential frontrunner Noynoy Aquino was greeted with near-adulation by the waiting crowds.

"I’m here because I loved his mother," one woman said, referring to the popular former President, Corazon Aquino, who died last year.

The former film star has been president before, but he was ousted in a popular revolt after just two years in power.

"I want to continue the reforms I started," Mr Estrada told the BBC.

Even the other main candidate, Manny Villar – who does not have such a political pedigree – is feted as one of the richest men in the Philippines.

And it is not just the presidential candidates who have famous names. Imelda Marcos – the 80-year-old wife of former President Ferdinand Marcos – is probably better known for her shoe collection than her political expertise, but she is running for a post in congress in the north of the country.

Down in the south, the international boxing champion Manny Paquaio has also decided to enter the political ring.

Celebrity, influence and family loyalties are at the centre of Philippine politics, where personalities count much more than policies.

But it is not all glitz and glamour – there is a dark side too. The Philippines is among Asia’s most vibrant democracies, but many election wins in the past have been soured by allegations of cheating, including the last poll in 2004, which the current President, Gloria Arroyo, narrowly won.

Despite her repeated denials, these claims of vote-rigging and corruption have dogged Mrs Arroyo throughout her presidency. 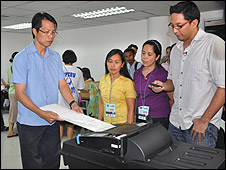 So this time the election commission is trying something different – a new automated voting system which it claims will minimise cheating and deliver results in just a few days, rather than the weeks it took with a manual count.

"The longer the results take to generate, the more doubt there is in the system, and the result of the election. By having the result at a faster time, you’ll eliminate the doubt," said the commissioner in charge of the project, Gregorio Larazabal.

But there are many critics who think this system could actually increase the possibility of vote-rigging, rather than reduce it.

Some say there will be problems in parts of the country that have electricity shortages – after all, you cannot vote electronically if there is no electricity.

Others question whether the $160m (£106m) project has been tested sufficiently – and a practice run earlier this week found serious faults with the memory cards, which are now being reconfigured.

International monitoring groups have also voiced concern about the complexity of automating a vote when there are so many candidates running for a mixture of local and national seats.

If the voting machines malfunction, there is good reason to be concerned. Philippine elections are notoriously violent – both before, during and after the polls – and a contested result could mean lives are lost. 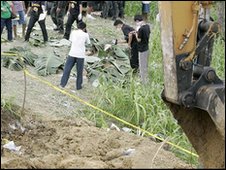 "Every election year in the Philippines we have cases of political killings – mostly related to local politics," said political analyst and journalist Marites Vitug.

"In the last elections, it may sound odd, but we celebrated that the number of killings had gone down to only 100."

This year, one incident has come to dominate discussions of pre-election violence.

In November, the bodies of 57 people were found in a shallow grave in the southern province of Maguindanao.

The victims had been on their way to register a local election candidate, and their killers are thought to have been part of an armed group linked to a rival candidate, from one of the most influential family clans in the area, the Ampatuans.

It was the worst single case of political violence in the country in living memory, and the armed forces admit the killings were a wake-up call ahead of the polls.

"We can only assure our public that we’re doing everything possible so as not to have a repeat of that time," said spokesman Colonel Ricardo Nepomuceno.

Both the army and police have now tightened security, increasing the number of patrols and checkpoints, and implementing a ban on civilians carrying guns – but they know that clans still have a powerful influence.

Despite the massacre, there are still more than a dozen Ampatuan family members running for local office – some of whom are currently in custody on charges relating to the killings.

In this election, it seems that powerful clans have as much influence locally as celebrities and family dynasties do nationally.