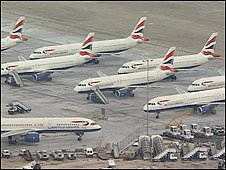 British Airways will learn later whether it faces a renewed threat of industrial action by cabin crew as fresh ballot results are announced.

Thousands of Unite union members have voted on a new offer aimed at ending a long-running row over pay and conditions, which BA says is "fair".

But Unite has "strongly recommended" its members reject the offer, raising the possibility of more strikes.

The airline said the seven days of industrial action had cost it up to £45m.

Further disruption to flights caused by ash from the Icelandic volcano in April cost it an additional £180m.

Tony Woodley, joint leader of Unite, said in a letter to cabin crew that BA was treating staff like second-class citizens who had been "branded" for going on strike.

He said the union was urging rejection of the new offer because BA had failed to restore travel perks taken away from those who went on strike and disciplinary action was being taken against more than 50 union members.

"The charges in the great majority of cases are entirely trivial and barely worthy of a slap on the wrist, let alone the sack," he said.

He added that he had made it clear to members that rejecting the offer could mean them having to "take a stand" against BA again.

Mr Woodley also said Unite had lost trust in BA’s commitment to finding a solution to the dispute.

"By their actions and behaviour throughout the dispute, and continuing to this day, it is impossible to take BA management’s words at their face value," he said.

BA said it had put a "fair offer" to Unite that addressed all the concerns raised during the past 14 months of negotiations.

"It offers our cabin crew the assurances they have been asking for, and so we are asking them to accept the proposal and put this dispute behind us," its spokesman said.

The ballot result comes a day after Duncan Holley, a leading union official at BA, claimed he was sacked for gross misconduct for taking time off work before Christmas to carry out union duties.

The Unite branch secretary said his dismissal after 12 years was "politically motivated". BA said it would not comment on individual disciplinary cases.