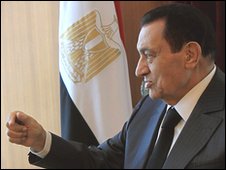 Egypt’s President Hosni Mubarak has challenged opposition groups to spell out their ideas for reform in his first public speech in months.

The government of Mr Mubarak, who has ruled since 1981, has used emergency laws to severely restrict political activity and protest.

Mr Mubarak, 82, has not indicated if he will stand for election next year, but in March returned from surgery abroad.

Egyptians are also complaining about high food prices and calling for better pay.

Food prices in Egypt are on the rise, pushing meat out of the reach of most people.

Speaking in Cairo on his return from Sharm al-Sheikh where he has been convalescing, he warned against stirring up "chaos" in the country.

"I say to those who raise slogans and content themselves with posturing: this is not enough to gain the trust of the people," he said.

"They must respond to the questions of the poor, what can they offer them?

"In this delicate period there can be no room for those who confuse change with chaos," he said.

He also promised the elections would be free and fair.

Mohammed ElBaradei, the former head of the UN’s nuclear watchdog, recently returned to Egypt from years of living abroad.

He has said if the constitution was changed to ensure fair elections he would consider standing for president in an election due next year.

He launched a new "forum for change" but has not said he will try to register it as a political party.

The main opposition party, the Muslim Brotherhood, is a banned organisation. It does have members of parliament, but they are elected as independents.

Muslim Brotherhood leaders are often arrested and their houses searched.

Mr Mubarak has just returned from Germany where he underwent surgery to remove his gall bladder.