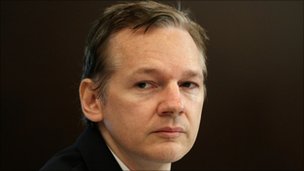 Internet hacktivists have fired the latest salvo in the Wikileaks infowar.

A group called Anonymous has hit sites that have refused to do business with the controversial whistle-blowing site with a series of distributed denial-of-service attacks.

It mirrors similar attacks aimed at the Wikileaks site.

Targets include the Swiss bank that froze founder Julian Assange’s assets and PayPal which has stopped processing donations to Wikileaks.

Anonymous is a loose-knit group of hacktivists, with links to the notorious message board 4chan.

A member of Anonymous who calls himself Coldblood told the BBC that “multiple things are being done”.

“Websites that are bowing down to government pressure have become targets,” he said.

“As an organisation we have always taken a strong stance on censorship and freedom of expression on the internet and come out against those who seek to destroy it by any means.”

“We feel that Wikileaks has become more than just about leaking of documents, it has become a war ground, the people vs. the government,” he said.

So far the denial-of-service attacks (DDoS), which swamp a site with so many requests that it becomes overwhelmed, have failed to take any sites offline although that is not the point of the attack, according to Coldblood.

DDoS attacks are illegal in many countries, including the UK.

Coldblood admitted that such attacks “may hurt people trying to get to these sites” but said it was “the only effective way to tell these companies that us, the people, are displeased”.

Anonymous is also helping to create hundreds of mirror sites for Wikileaks, after its US domain name provider withdrew its services.

“At the last count there were 507 mirrors of Wikileaks,” said Coldblood.

Wikileaks has been hit by a series of denial-of-service attacks, following the release of a quarter of a million US embassy cables.

It is unclear who is behind the attacks but it seems that Wikileaks is getting too hot to handle as many of the businesses that work with the site, distance themselves from it.

On 3 December, domain name provider EveryDNS cut off service, citing the denial-of-service attacks as the reason.

Amazon also ended an agreement to host the site, saying Wikileaks failed to adhere to its terms of service.

It said that Wikileaks was unable to ensure that it “wasn’t putting innocent people in jeopardy” by leaking classified documents.

MasterCard Worldwide is also choking payments to the site.

The Swiss bank, PostFinance has closed the account of Wikileaks founder Julian Assange.

In all cases, the companies have insisted their decisions are not politically motivated.

But some have taken a different view.

French internet service provider OVH said it had no plans to end the service it provides to Wikileaks.

“The information is already out there”

“OVH is neither for nor against this site. We neither asked to host this site nor not to host it. Now it’s with us, we will fulfil the contract,” said OVH managing director Octave Klaba.

“It’s neither for the political world nor for OVH to call for or to decide on a site’s closure,” he added.

French industry minister Eric Besson had called for the site to be shut down, saying France could not host internet sites that “violate the confidentiality of diplomatic relations and put in danger people protected by diplomatic secrecy”.

But on 6 December, a French judge declined to force OVH to shut Wikileaks down, saying the case needed further argument.

Wikileaks has amassed some high-profile enemies including Senator Joe Lieberman, who chairs the US Homeland Security Committee.

He has urged the US government to “use all legal means necessary to shut down Wikileaks before it can do more damage by releasing additional cables”.

Dr Joss Wright, a research fellow at the Oxford Internet Institute thinks it could be too late to legislate Wikileaks offline.

“Wikileaks has released an encrypted file containing all of the embassy cables,” says Dr Wright. “The information is already out there.”

Dozens of copies of that encrypted file have been shared using peer-to-peer networks, such as BitTorrent. “Once the information is there, it’s virtually impossible to stop people sharing it,” said Dr Wright.

Founder of Wikileaks Julian Assange has been arrested and is due to appear at City of Westminster Magistrates’ Court later.

He is accused by the Swedish authorities of sexual assault.