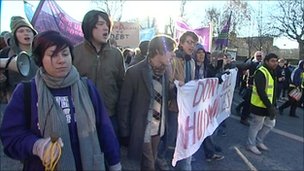 Students are staging a fourth day of protest

Demonstrations are taking place in England and Scotland in the build-up to Thursday’s vote in the Commons.

School pupils in London are protesting too – one school is sending children home early because of fears about a planned occupation.

Ministers have announced new concessions to their proposals.

Tuition fees are due to rise to a maximum of £9,000 a year from the present level of £3,290 – a move which ministers say will secure the future of university funding.

The changes are due to take place from 2012.

On Wednesday morning, the government said the £21,000 salary at which graduates start repaying their fees would be uprated each year for inflation.

The plan had been to increase it in line with inflation every five years. 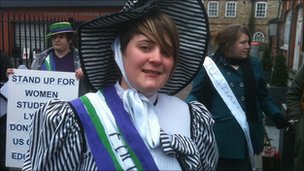 Olivia Bailey says women will suffer most from the fee rise

And more part-time students will be able to apply for student loans. They will become eligible if they study for a quarter of the year rather than a third as planned.

On Thursday, the controversial plans on tuition fees will be put to a vote in the House of Commons, with Liberal Democrat MPs under continued pressure over their pre-election pledges not to vote for a fee rise.

The National Union of Students is staging a national day of action on Wednesday and on Thursday there will be a lobby of parliament. Academics and other university staff are joining in.

In London, a group dressed as suffragettes demonstrated outside the constituency offices of Lib Dem minister Lynne Featherstone in North London.

She said women would suffer more under the proposals because they would take longer to pay off their student loans and therefore pay more interest.

“If this bill is passed it will be a step backwards for women’s education.”

It has now been confirmed by the Lib Dems that its ministers will vote for the tuition fee rise, even though they could have abstained under the coalition agreement.

The latest protest – as with the earlier ones – has spread to school pupils.

At the Camden School for Girls in north London, pupils are staging sit-ins in the sixth form at break-times and are aiming to sleep in the school tonight.

And at the Acland Burghley School in north London, pupils are being sent home early because of fears about a planned occupation.

A message from the head teacher Jo Armitage on the school’s website says: “An occupation of the school is planned in protest against university tuition fees.

“As this has been widely publicised it is likely to attract large numbers of students and the general public and I cannot ensure students’ safety in school.”

Students in Scotland are staging protests too – even though the changes being voted on on Thursday will only affect England directly. 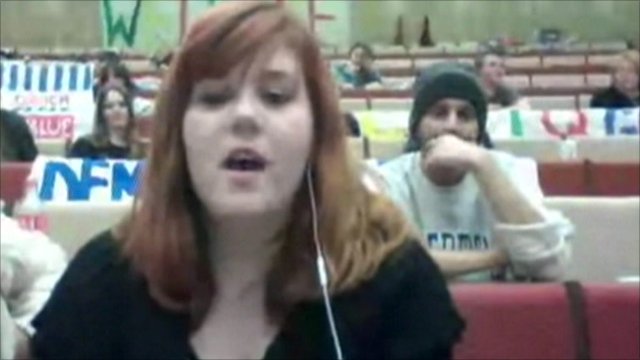 They are worried a tuition fee rise in England will fuel calls for the re-introduction of graduate contributions in Scotland and mean that Scottish students studying in England will incur more debts.

Liam Burns, president of NUS Scotland, said: “Thousands of students, pupils, teachers and workers across Scotland are braving sub-zero temperature and dangerous roads to make it clear to people and politicians all over the UK that the Westminster vote to increase tuition fees is far from an English-only matter”.

The Welsh Assembly has announced that university fees will rise in Wales to up to £9,00 , but that Welsh students will have to pay no more than about £3,000 wherever they study in the UK.

Students going to Wales from England will be expected to pay full costs.

A lecturers’ union is warning one in three English universities is at risk from the government’s plans for universities in England.

The University and College Union says 49 out of 130 universities could face serious financial difficulties – and some could face mergers or closure.

The government insists the plans are fair and will safeguard the future of England’s universities.