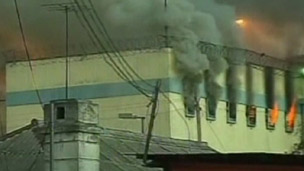 There were reports guards had initially prevented firefighters from entering

A fire in a prison in the Chilean capital Santiago has left at least 81 inmates dead, officials say.

The blaze broke out in the San Miguel prison at 0530 local time (0830 GMT), with television pictures showing smoke billowing from the building.

Local media said hundreds of inmates had been evacuated and that at least 19 were injured, some with serious burns.

Unconfirmed reports said the fire broke out after a fight between rival gangs, who set mattresses on fire.

Health Minister Jaime Manalich said this was the deadliest incident in the history of the Chilean prison service.

The BBC’s Gideon Long in Santiago says the fire is now under control but there are chaotic scenes as relatives arrive at the prison.

A spokesman for the state prison system told Reuters news agency: “We are trying to identify the 81 dead inmates now.”

Our correspondent says local media are reporting that 1,900 inmates were in the prison, although it has a capacity for only about 900.

There were reports that prison guards had initially prevented firefighters from entering the prison, which is in the south of the capital, La Tercera newspaper said.

The television pictures showed some prisoners waving their hands through the bars of the jail as relatives screamed at security forces to allow them in to help.

An investigation is under way into the cause of the blaze.