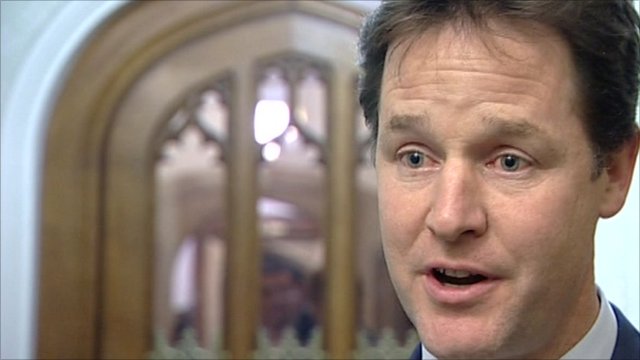 Nick Clegg: “This is the best and fairest possible way”

The government has announced further concessions to its controversial plans to increase tuition fees ahead of a Commons vote on Thursday.

The £21,000 salary at which graduates start to repay fees will be uprated each year by inflation from 2016 – not just every five years, as was planned.

Current graduates will also see the existing £15,000 repayment level uprated for inflation from 2012.

The changes come amid speculation about a sizable rebellion by Lib Dem MPs.

The concessions would also see part-time students able to apply for student loans if they study for a quarter of the year, rather than a third as planned.

In a statement, Business Secretary Vince Cable said: “Our modelling to date has assumed that that threshold should be uprated every five years in line with earnings. In order to give better protection for those on lower incomes, we now propose that the uprating should instead be made every year.

“Around a quarter of graduates will be better off in this new, more progressive regime than under the current regime.”

He added: “These improvements further enhance a reform package which will put higher education funding and student finance on a sustainable footing, improve the quality and viability of our university system, offer more progressive support to those on lower incomes, both while studying in HE and when repaying as graduates, and contribute to paying down the deficit.”

On Tuesday Deputy Prime Minister Nick Clegg announced that all Liberal Democrat ministers would vote to raise the cap on university tuition fees in England to £9,000 from the current £3,290.

Former Lib Dem leaders Charles Kennedy and Sir Menzies Campbell are among MPs set to oppose the plans which have prompted weeks of student protests. Others are expected to abstain.

And Julian Lewis has become the second Tory MP to say he will vote against them.

There is talk that Energy Secretary Chris Huhne may be forced to return from the UN climate summit in Cancun, Mexico, for the vote after failing to find a “pair” – an opposition MP to join him in not voting.

Speaking after addressing his MPs on Tuesday evening, Mr Clegg said: “The ministerial team in government… every single one will vote for this measure because it is the best possible, the fairest possible measure to ensure we have world class universities in future and that youngsters from whatever background can continue to go to university.

“That’s why all of us as a team in government will vote for this bill on Thursday.”

He said that did not include parliamentary private secretaries – who assist ministers – but those with doubts were being encouraged “to take up the opportunity in the coalition agreement to abstain”.

It looks like the party will be split three ways over the plans to to raise fees, with some backing, some opposing and some abstaining from the vote.

Before the 2010 election the Lib Dems pledged to phase out university tuition fees over six years.

The party’s MPs also signed a pledge organised by the National Union of Students during the election campaign to oppose any future rises in fees from the current £3,290 a year.

But the policy of the government – in which the Lib Dems are partners – is to support a rise.

At a meeting ahead of Thursday’s vote, Mr Clegg told his MPs he had hoped they could “walk through the fire” together – but he now accepted a collective position was not possible.

He praised the way Lib Dem MPs had conducted themselves in a “difficult” situation and acknowledged there had been a “lot of pressure” from the media and protesters.

But he said that “to govern was to choose” and, with money tight, the coalition had decided to pump funds into early years education.

Under the terms of the coalition agreement, Lib Dem MPs, including ministers, are allowed to abstain on the issue.

“Their loyalty may have been more likely to have been assured had they been given a decent share of government posts in coalition, but only a very few have.”

The different tribes of Lib Dems

BBC political editor Nick Robinson said Mr Clegg expected at least half of his 57 MPs to vote for the proposals.

The National Union of Students is promising to campaign directly against Lib Dem MPs who back the fees increase, arguing that the change will deter people from poorer backgrounds from going to university.

Meanwhile shadow chancellor Alan Johnson – who has previously opposed a graduate tax – has told the Times he believes there is now a “strong case” for one.

Mr Johnson – who steered Labour’s legislation introducing tuition fees through the Commons in 2004 – accused the coalition of “abusing the legacy I left them”.

He said: “We are now seeing how casually the variable fees system can be distorted with such damaging effects. It is in these circumstances that there is a strong case for a graduate tax, which may offer a fairer way of sharing costs between individuals and government.”

In September, in an open letter to Ed Miliband in the Sunday Independent the day after he was elected Labour leader, Mr Johnson urged him not to introduce a graduate tax: “We should be proud of our brave and correct decision to introduce tuition fees. Students don’t pay them, graduates do, when they’re earning more than £15,000 a year, at very low rates, stopped from their pay just like a graduate tax, but with the money going where it belongs: to universities rather than the Treasury.”