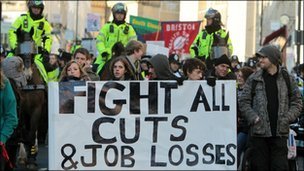 Students are preparing for a fourth day of protests

A third of England’s universities have been labelled “at risk” from government cuts, with the worst hit facing mergers or even closures.

A study for the lecturers’ union, the UCU, claims plans to cut budgets and raise tuition fees could leave institutions fighting for survival.

It said 49 faced a “serious impact”, with four at “very high risk”.

The government said it was aiming to secure the future of university funding.

The report is being published on the eve of the Commons vote on tuition fees and as students, school pupils and lecturers prepare for a fourth national day of protests.

The UCU report looks at the financial risk to England’s 130 universities, assessing how dependent they are on public funding.

It also considers how many students they take from poor backgrounds and how well they do in recruiting overseas students who boost university coffers with higher fees.

All four have rejected the claims, saying they are popular with students.

The report goes on to name and label 23 as “high risk” and a further 22 as “high-medium risk”.

On the “high risk” list are many well-respected universities such as Buckinghamshire New University, the University of Worcester and Roehampton University.

Some of these have been vocal in opposing government plans for cuts and higher student fees.

The “medium-high risk” list features universities such as Manchester Metropolitan, Leeds Metropolitan and Nottingham Trent University as well as the Open University.

UCU general secretary Sally Hunt says many of the 49 universities deemed at “high financial risk from government plans” are the newer universities, along with a number of specialist institutions.

“We are not alone in raising concerns about the future of our universities.

“A recent survey of university leaders revealed that nine out of 10 expect an institution to close due to financial pressures and last month the business secretary, Vince Cable, warned that many universities are essentially bankrupt.”

She added: “Universities going bust would have a devastating impact on their local communities – as would the withdrawal of government funding.”

The report also claims millions of pounds would be lost to local economies in the event of universities closing.

The report pulls out Sheffield Hallam University as an example, which it says “is by common consent a well-run university”.

“On a turnover of £215m in 2009, Sheffield Hallam made a surplus of just £1.9m. The report estimates that the withdrawal of state funding for non-priority subjects will cost the institution around £47m a year.”

It adds: “If it fails to recover at least 96% of this lost income, presumably through higher fees, it will be forced into deficit and will need to consider reducing provision.”

A spokesman for the university said it had taken steps to contain costs.

But the spokesman added: “The UCU report is right to identify as at risk those institutions which are dependent on Hefce grants and Department of Health and Teacher Development Agency funding and who recruit a significant number of widening participation students.

“This type of institution educates around 50% of students in higher education.”

Professor John Cater, vice-chancellor of Edge Hill University, one of those deemed most at risk, said: “There are universities that clearly are at risk – if demand is low and the institution isn’t in a good financial health there’s a vulnerability – but that is not us.

“However, it is going to be hard to sustain our upward direction.”

“Students will make decisions about which course and university is right for them and funding will follow those choices,” he said.

“The new arrangements are fairer than the present system and affordable for the nation.”