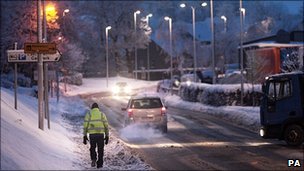 Edinburgh Council has asked the Army to help clear the streets

The public should clear icy side roads and pavements not treated by councils, the transport secretary has suggested.

After another freezing night prompted Met Office warnings of icy roads across much of Britain, Philip Hammond said people should help neighbours.

There has been no let-up for some areas, with severe weather warnings for heavy snow affecting Northern Ireland, north-east Scotland, Yorkshire and the Humber.

And BBC weather forecaster Nick Miller said temperatures would again struggle to get above freezing in many places. Met Office severe weather warnings for icy roads are in place for all of Scotland and Northern Ireland, and most eastern areas of England

Problems persist on the roads, particularly in Scotland’s central belt where Transport Scotland is again advising against all but “absolutely essential” travel

The westbound M8 remains closed between Edinburgh and HarthillThe A171 near Whitby, North Yorks, is “passable with care” after more than 100 vehicles had to be rescued by police and snow ploughsOn the railways, there is widespread disruption – including many cancellations – throughout ScotlandEast Coast is operating reduced services, while some local services in Yorkshire, Lincolnshire and north-east England have been cancelledTravellers at airports including Glasgow and Edinburgh and Belfast International are advised to check flight times with airlines

Mr Hammond said councils had to make choices about which roads to grit but could provide salt to allow the public to clear residential streets.

“In many cases people would like to have the opportunity to have access to grit and salt supplies so that on roads that are not on the council’s gritting route they can… make the pavements a bit easier, make it a bit easier for them to get out of their driveways,” he told BBC Breakfast.

“People have always dug their way out of their own driveways… and I would encourage people who are able to do that kind of thing to continue doing it for themselves and for neighbours who are perhaps less able to.”

He said the government had recently put together a “common sense” code of practice which, if followed, should protect the public from legal action as a result of attempting to clear snow.

However, he said there was no need in England for the Army to be called in because councils were still able to call contractors if they needed help clearing roads.

Get the latest on travel problems via your local website Check if snow is forecast in your area at BBC Weather Details of motorway and local road closures and public transport disruption are available at BBC Travel News For advice on handling difficult driving conditions, see the Highways Agency website For information about severe weather warnings, see the Met Office website For information about staying healthy in the cold weather, see the NHS Winter Health website

Voluntary groups and offenders serving community sentences were already helping out, he said.

“You would expect us in extraordinary circumstances… to use every facility to help people,” he added.

Scotland’s Transport Minister Stewart Stevenson has apologised for the situation on the M8, where hundreds of drivers became stranded overnight on Monday, and is expected to make a statement to MSPs later.

Police have said people who had abandoned vehicles should not return to them unless advised to do so.

Some vehicles have been removed already and officers are contacting owners to tell them how to get them back.

The RAC said breakdowns were there were 50% more call-outs than normal.