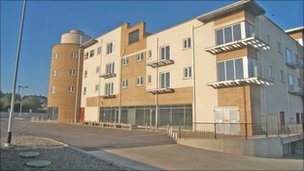 No offer was made for the apartments at the auction

An apartment block due to be sold at auction in Ballybofey, Donegal, on Wednesday, was withdrawn when it failed to attract a single serious bid.

Attempts to sell the 47-apartment building took place amid a protest by contractors who were owed money.

The apartments at Navenny Place, Trusk Road, were to be sold as a package with a guide price of 550,000 euro.

Their reserve price meant the dwellings would be valued at just under 11,700 euro each.

A shouted bid of 5,000 euro from the crowd was promptly dismissed by the auctioneer.

Disgrunted builders and sub-contractors staged a protest as potential buyers arrived at the unfinished site.

The one, two and three bedroom apartments had been placed in receivership and range in size from 63 square metres to 108 square metres.

The properties were marketed as “completed to at least first fix stage” and were being sold in one single lot “as is” at current stage of construction.

There are more than 2,800 so-called ghost estates in the Republic according to a survey carried out by the Irish government.