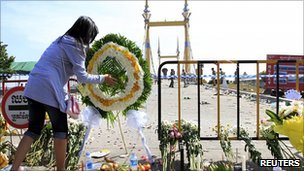 Cambodia is holding a day of mourning for more than 450 people killed in a festival stampede.

Prime Minister Hun Sen is due to join officials and grieving relatives for a religious ceremony at the footbridge where the tragedy happened.

A preliminary investigation has found that the swaying of the bridge near the capital, Phnom Penh, triggered a panic.

Witnesses said some people were crushed on the bridge, while others fell into the river and drowned.

Crowds of revellers had been crossing the bridge to reach an island where an annual water festival was being held on Monday.

A committee set up to investigate the disaster found that many of the people on the suspension bridge were from the countryside and were unaware that such structures often swayed, local media reported.

“Some started screaming that the bridge was collapsing, that people were getting electric shocks and that the iron cables were snapping, so the people pushed each other and fell down and the stampede happened,” said Prum Sokha, heading the panel of inquiry.

The first funerals and cremations took place across the country on Wednesday.

Mr Hun Sen said a memorial would be built “to commemorate the souls of the people who lost their lives in the incident… and to remember the serious tragedy for the nation and the Cambodian people”.

But many relatives say they want answers.

“I feel very sad and angry about what happened,” said Phea Channara at a funeral service for his 24-year-old sister near Phnom Penh.

“I wonder if the police really did their job. Why did they allow it to happen?”

Mr Hun Sen has described the stampede as the country’s biggest tragedy since the Khmer Rouge era in the 1970s, which left an estimated 1.7 million people dead.