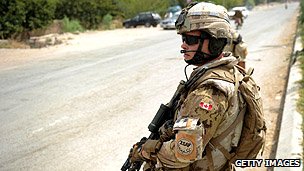 Canadian military police are investigating fake calls to families of soldiers in Afghanistan claiming their relative has died in combat, authorities have said.

At least three families at a military base in Quebec have been targeted, according to the Canadian Broadcasting Corporation.

One woman was reportedly told her husband had been killed by a bomb.

Police say those responsible could face jail time if caught.

“Military personnel should not be needlessly worried about their families when they are fighting for our country in far away lands,” said Defence Minister Peter MacKay, adding that the imposters responsible for the calls were “insensitive, amoral and disgusting”.

He added: “It is our hope that the perpetrators of this despicable action are brought to justice.”

A family centre at the Canadian Forces Base Valcartier in Quebec has offered counselling to those who have been targeted by the phoney calls.

The news follows last week’s announcement by Canadian government ministers that the country would send up to 950 military trainers to Afghanistan after its combat troops leave the country next year.

Canada has nearly 3,000 troops in Afghanistan.

The country has come under international pressure not to pull out at a time when the US is boosting its military commitment.