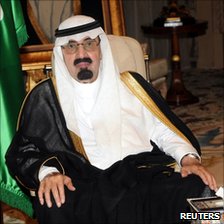 Saudi Arabia’s King Abdullah has undergone a successful back operation in the US, according to media reports.

The 86-year-old Saudi ruler arrived in New York on Monday seeking treatment for a herniated disc, complicated by an accumulation of blood around the spine.

Al-Arabiya TV reported that King Abdullah was “doing much better following the operation”.

Crown Prince Sultan, the next in line to the throne, is running Saudi Arabia in the king’s absence.

The crown prince is also in his 80s and suffering his own health problems, from which he had reportedly been recuperating in Morocco.

Before the king headed for New York, Saudi officials had reassured the public and international allies that there was nothing to worry about.

Saudi Arabia has more than 25% of the world’s known oil reserves and is a key ally of the US in the Middle East.