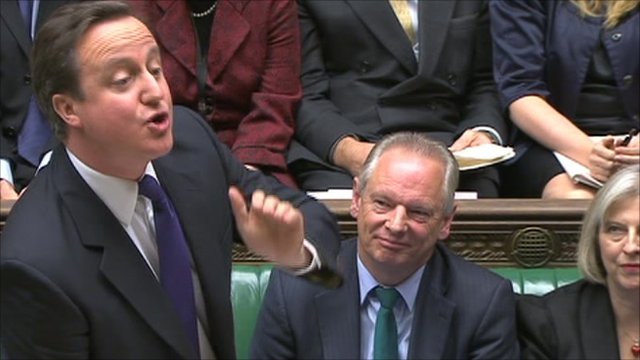 David Cameron and Ed Miliband have clashed over plans for the future funding for schools sports in England.

Labour’s leader said proposed changes were “daft” as, due to its efforts in office, the number of children doing more than two hours of sport a week had risen from about 25% to more than 90%.

He accused Education Secretary Michael Gove of being “high-handed and unfair”.

But Mr Cameron said participation levels in competitive sports was poor and Labour’s record was “terrible”.

The two leaders clashed over the proposed changes at Prime Minister’s Questions on the day the government outlined proposed legislation on schools reform.

Instead of handing out money for individual projects, the prime minister said school sports funding would, in future, be included within the basic schools budget which would rise by £3.6bn over the next four years.

Head teachers would be given more freedom to decide where the money was spent, he told MPs, arguing that the current system had “tied them up in red tape”.

The prime minister said Labour had failed in the area since the number of schools offering sports such as rugby, hockey and gymnastics had actually fallen since 1997.

Only two out of five children were currently playing any competitive sport, Mr Cameron told MPs, saying this was a “terrible record”.

“Over the last decade we saw a lot of money put into school sport but we did not see a lot of progress,” he said. “This approach did not work and it is time for a new one.”

But Mr Miliband said the government would “live to regret” its approach.

More than a million more children were taking part in competitive sports between schools now than in 1997, he said, supported by a network of 200,000 volunteers.

“This is frankly a daft decision which he should U-turn on as soon as possible,” he told Mr Cameron.

“I am afraid it sums up this education secretary – high-handed, incompetent and unfair.”