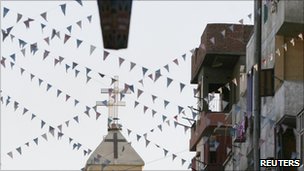 Police in Egypt have clashed with Coptic Christians over the construction of a new church.

Police fired tear gas to break up the protest of at least 150 Copts, in the Giza area of Cairo.

Reports say one protester was killed and several police and protesters were injured. About 20 people were arrested.

The Christians said they had permission to build the church but Egyptian media said permits had been denied, Reuters news agency reported.

Christians make up about 10% of Egypt’s 85 million population.

There has been friction in the past between the majority Muslims and Christians, who complain they do not have the same freedom to build places of worship.