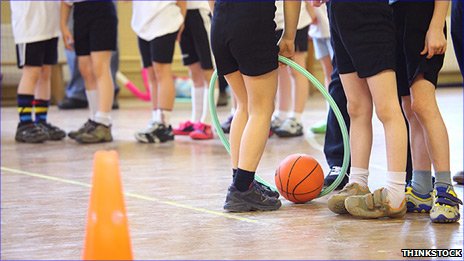 With funding changes to school sports planned, a shift to a more competitive ethos is mooted, but there is likely to be a bitter battle for the heart of PE.

For many people PE encapsulates their unhappiest memories of school. They look back to blasted, windswept sports fields where shouting PE teachers in ill-fitting tracksuits marshalled unwilling pupils.

The classic fictional depiction is the 1969 film Kes, where Brian Glover’s Mr Sugden takes part in a football match as both player and referee, awards himself a penalty and then remonstrates with Billy Casper by knocking him into the mud with a wet football.

It has that classic breeding ground for school social stigma – the picking of teams. An opportunity to further make life miserable for the group memorably referred to as the “wets, weirdos and fatties” in the sitcom, Red Dwarf.

The popular perception is that something started to change in the culture of sports and physical education in schools in the 1970s. Activities that didn’t alienate the unsporty started to chip away at the dominance of competitive team sport. 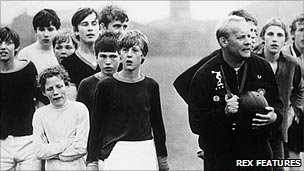 Mr Sugden from Kes is not considered a model PE practitioner

But now there is to be a shift back towards competitive sport. The government is ending the ring-fencing of £162m of funding for School Sport Partnerships, which promoted co-operation in sport and PE provision between schools, as well as inter-school competitions.

Opponents say this will lead to money being used to plug gaps elsewhere in school budgets, but the government is instead focusing on its plans for Olympics-style competitions for schools.

But what everybody does agree on is the importance of PE. Adults may look back ruefully to being made to exercise in their underpants or do punishment laps of a field, but few would dispute the long-term benefits.

“Getting the regular habit of exercise ingrained controls weight later on in life,” says Dr Andy Franklyn-Miller, a consultant in sports medicine.

This week his representative body, the British Association of Sport and Exercise Medicine, is to call for a health-focused segment to be incorporated into PE lessons.

But it’s not just about obesity, Dr Franklyn-Miller says. Getting used to exercise helps avoid injuries later in life. Even basic routines like improving balance can be vital to developing children.

“They have really poor physical skills and physical strength. They are coming through ‘floppy’ because of [early years spent] staring at screens.”

It puts even more of an onus on PE teachers. And they have to make their subject fun. While you might be able to force children to learn something from academic lessons, a string of early Kes-style experiences might make some shun sport in adult life.

Comedian John O’Farrell has unpleasant memories from life at his all-boys school.

“My school didn’t do football, so I was forced to do rugby. I was small and skinny… was thrown the wet, muddy ball and everyone tried to jump on my head.”

Passing the ball immediately, even to the opposition, was O’Farrell’s solution. He then tried basketball, but as a late-developer did not like playing in the “skins” team, without shirts.

“I tried to shoot for the hoop without revealing my bald, pre-pubescent armpits. The teacher would say ‘shoot, O’Farrell, shoot… no, not underarm’.”

O’Farrell started forging sick-notes from his mother and soon developed a cottage industry performing the same service for other boys.

Former headteacher Roger Hurn, author of 101 Dance Ideas, goes into schools to encourage the use of dance. He says children can be put off sport by bad experiences, as he was by a strict, rugby-mad PE teacher.

“I never played rugby again, the experience under that teacher was so horrible. I won’t even watch it. It has a negative effect.”

Modern PE is aimed at avoiding the above scenarios. A plethora of options have sprung up in recent years.

A recent government study found 37% of schools offered cheerleading. At a fifth of schools a child can learn yoga. Individual sports like boxing are on the rise, but traditional team games like rugby, hockey and netball are in decline. 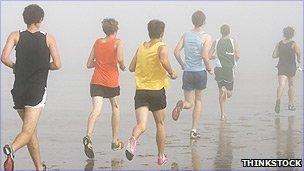 The cross-country run – not everyone’s favourite

Peripatetic practitioner William Allen, author of Games, Ideas and Activities for Primary PE, will try anything to get children’s enthusiasm flaring. Street dance, tri-golf and American football are among the activities he uses.

“PE is now a gateway to doing things outside school,” says Mr Allen.

Starting out in the 60s at a school in Liverpool, he recalls excellent provision of football, rugby, cross country, tennis, athletics, and volleyball, among others.

“It was unusually good, but there were lots of other good schools,” he says.

But by the 1980s PE teaching was becoming more prescribed, with the National Curriculum meaning many boxes had to be ticked.

“You did six-week blocks of a sport. I defy anybody to learn a game properly in six weeks,” says Mr Twentyman.

“I liked kids to get stuck in. I think today, if it’s raining or windy, they won’t go out and play,” he says.

His colleague Chris Sproat, now also retired, was disappointed at the limits the evolving health and safety culture imposed. Instead of just taking a group of children for a run outside school premises, forms had to be diligently filled.

Both teachers and children might want things to be a little freer.

“There are kids who like structured sport, but for the ones who don’t we need to be more creative about encouraging them to be physically active,” says Tim Gill, author of No Fear: Growing Up in a Risk Averse Society.

“That might mean introducing more fun, more choice and maybe a little bit of danger.”

But whatever happens, the place of the brutal Mr Sugdens is hopefully gone. With funding cuts to school sports planned, a shift to a more competitive ethos is mooted, but there is likely to be a bitter battle for the heart of PE.