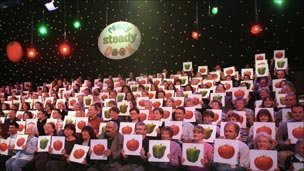 The audience judges the cook-off

Ready Steady Cook has hung up its apron, given the chop after almost 16 years on air, with only repeats to be screened.

The last grain of salt has run through the egg timer. The timer has pinged on the oven. The goose is cooked. And the red tomato and green pepper have been consigned to the great compost heap in the sky.

Fans of daytime television have reacted with sadness to news that BBC Two’s Ready Steady Cook has staged its last cook-off.

No more episodes of Britain’s longest running cookery show are being made, although mourners with a £5 bag of mystery ingredients to hand can console themselves with repeats screening on daytime TV until the end of next year.

One clue to its passing perhaps lies in its prosaic team names – red tomato and green pepper.

Born in 1994 when guacamole would never, ever have been served in a Hartlepool chip shop, the show’s aim was to pep up Britain’s culinary tastes with a dash of “Percy Pepper” and “Sally Salt”, as chef-turned-presenter Ainsley Harriott would have it.

It came along at a time when we were still a bit naive about cooking in this country. It changed people’s attitudes towards food.

Suddenly we were looking at these professional guys doing something very spontaneous that only cost a certain amount of money.

Viewers could see products that they had never seen before and understand what was a reduction or a jus or a mirepoix – all those culinary terms.

As a chef, it was a real discipline. Even when I was presenter, every time they tipped the contents out of the bag I was thinking, “What would I do with that?”

Within a few years, no tomato would be simply red – the nation had woken up to sun-dried, sun-blushed, cherry vine – and green peppers had been all but eclipsed by a rainbow coalition of red, orange and yellow varieties.

Eulogies come this week from close friends, including chefs Antony Worrall Thompson and James Martin, and presenters Fern Britton and Harriott himself.

Ready Steady Cook is survived by younger sibling the Hairy Bikers, who stage their own cook-off, and its glamorous older siblings Masterchef, Celebrity Masterchef, Masterchef: The Professionals and Junior Masterchef.

And its progeny include Goosey Goosey Gammon Traffic Lights 123, an on-the-spot culinary creation of chef Harriott, along with some 5,478 other dishes – named as if after a list of random ingredients tipped from a shopping bag – in its recipe archive.

This lasting legacy will be a boon for those stuck for inspiration when the cupboard is all but bare.

Whatever to make with paneer cheese (soon to go off), dried figs and tinned kidney beans? Why, Harriott’s own paneer cheese and fig skewers with bean dip, of course. Or, if there’s pitta bread in need of using, Gino D’Acampo’s curried paneer with tzatziki and pitta bread.

No flowers. Or canapes.