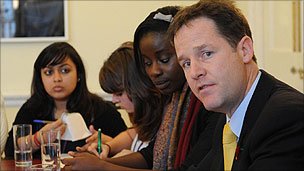 Liberal Democrat leader Nick Clegg is calling on students to reconsider the coalition’s plans for tuition fees before taking part in a day of protests planned for Wednesday.

“Examine our proposals before taking to the streets. Listen and look before you march and shout,” says Mr Clegg.

Students have accused Liberal Democrat MPs of planning to break their pledge to vote against raising fees.

But Mr Clegg says his plans will “make higher education open to everyone”.

The Liberal Democrats have become a particular target for student protests – and a demonstration is planned for Wednesday outside the party’s headquarters.

About 100 students also gathered to protests outside the hall in central London where Mr Clegg was delivering the annual Hugo Young memorial lecture on Tuesday evening.

Students are angered that the Liberal Democrats pursued the student vote with a personal, signed pledge from their election candidates that they would vote against increasing tuition fees.

Mr Clegg and his MPs signed a promise to students: “I pledge to vote against any increase in fees in the next parliament.” 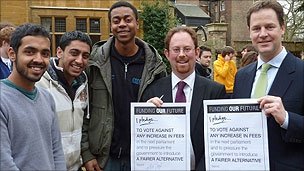 At the election, Mr Clegg signed a pledge to students that he would vote against any fee increase

Mr Clegg made a personal video message for students in which he promised to resist any increase in fees.

But under the plans now being backed by Mr Clegg, the level of tuition fees would increase almost threefold to £9,000 – and public funding for university teaching budgets would be reduced for many subjects.

In a speech ahead of a day of protests, Mr Clegg told his audience: “It is no secret that the government’s proposed reform is not the same as the policy my party and I campaigned on.

“It is taking everybody some time to realise that in a coalition, parties are not always able to deliver on their preferred policy options.”

“Here’s what makes me angry. Oxford and Cambridge take more students each year from just two schools – Eton and Westminster – than from among the 80,000 pupils who are eligible for free school meals”

Mr Clegg said that the plan put forward by the coalition government would offer more assistance to the poorest.

“Nobody will pay a penny back until their earnings reach £21,000 per year, compared to £15,000 now. The highest-earning graduates will pay back the most.”

And he highlighted that part-time students would now benefit from financial support.

“There is lots of anger about higher education at the moment and I understand it. I am angry too.

“Here’s what makes me angry. Oxford and Cambridge take more students each year from just two schools – Eton and Westminster – than from among the 80,000 pupils who are eligible for free school meals,” said Mr Clegg.