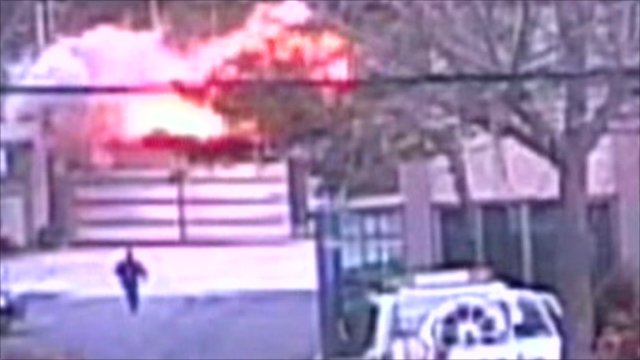 North Korea’s shelling of an island in South Korea near a disputed sea border has drawn international condemnation.

US President Barack Obama said he was “outraged” by the attack on Yeonpyeong island. It was also denounced by Russia, Japan and European countries.

UN chief Ban Ki-moon called it “one of the gravest incidents since the Korean War” and urged restraint on both sides.

South Korea returned fire and threatened missile strikes if there were “further provocations”.

South Korea’s military had been carrying out an exercise nearby, but it denies opening hostilities by firing towards the North.

Two South Korean marines died when dozens of artillery shells landed on the island – most of them hitting a military base. Both soldiers and civilians were wounded.

The South fired back some 80 shells. Casualties on the northern side are unknown.

In Washington, White House spokesman Bill Burton said the North had “a pattern of doing things that are provocative” and called Tuesday’s assault “a particularly outrageous act”.

The US state department vowed to forge a “measured and unified” stance with major powers. The Pentagon said it would co-ordinate its response with the South Korean military.

“The secretary general condemns the attack and calls for immediate restraint,” he added.

The current president of the Security Council, British ambassador Mark Lyall Grant, said he was in touch with other members about what to do next. No country has formally requested an emergency session.

Russia’s foreign minister warned of a “colossal danger”, and said those behind the attack carried a huge responsibility.

Japanese Prime Minister Naoto Kan said he had ordered ministers to “make preparations so that we can react firmly, should any unexpected event occur”.

Nobody needed any reminder of the volatility of the relations between North and South Korea, nor of the sensitivity of their disputed maritime border.

In March, a South Korean warship was sunk by an explosion and an investigation indicated strongly that the North was responsible.

The shelling of Yeonpyeong fits into the same pattern. From the North Korean viewpoint, this is about establishing deterrence over the South and defending its interests.

But it is also a wider demonstration to the world of the North’s power and an indication of some kind of political transition.

The EU and the UK also condemned the North, but China – the North’s main ally – refused to apportion blame.

A spokesman for the Chinese foreign ministry said that both countries should “do more to contribute to peace”.

South Korean President Lee Myung-bak called the incident “an invasion of South Korean territory”, and warned that future provocations could be met with “enormous retaliation”, including missile strikes on North Korean positions.

The North will strike back if South Korea “dares to invade our sea territory by 0.001mm”, it warned.

29 October: Troops from North and South Korea exchange fire across the land border

Koreans angry and worried Brief history of the Korean War

There have been occasional cross-border incidents since the Korean War ended without a peace treaty in 1953, but the latest comes at a time of rising regional tension.

North Korea’s reclusive leader Kim Jong-il is thought to be ill and trying to ensure the succession of his youngest son.

The BBC’s John Sudworth in Seoul says the heir apparent may be trying to build a reputation with the country’s hardline military elite – suggesting a period of further provocation towards the South.

On Saturday, it emerged that Pyongyang had shown off what it claimed was a new uranium enrichment facility to an American scientist.

The move prompted the US to rule out the resumption of six-party talks on nuclear disarmament that Pyongyang abandoned two years ago.

The western maritime border, also known as the Northern Limit Line, has been the scene of numerous clashes in the past.

In March, a South Korean warship went down near the border with the loss of 46 lives. International investigators say a North Korean torpedo sank the ship, although Pyongyang has denied any role in the incident.