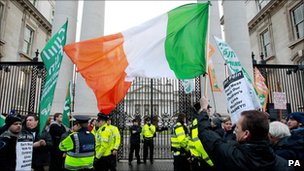 The Irish government is set to publish an austerity plan required for its EU- and IMF-led bail-out.

It follows another day of market angst, with shares down sharply on Tuesday and the euro 1.9% lower against the dollar.

Meanwhile, state broadcaster RTE said the Republic had agreed an 85bn euro bail-out package in a report called “premature” by the government.

The four-year austerity plan to be revealed on Wednesday is a precondition for the financing.

It will provide some detail of spending cuts and tax rises, including a hefty 6bn euros expected for next year, with the aim of bringing the government’s budget deficit down to a target of 3% of GDP by 2014.

It will also outline how Dublin intends to reform its banking sector which it has needed to inject with 45bn euros.

According to the RTE report, the government will inject money into the banks, increasing their capital – the cushion against future losses – to 12% of assets from 8% currently.

“European governments hoped that their unambiguous signal on Sunday night would calm investors… It hasn’t happened.”

The move would probably involve the government all but nationalising Allied Irish Bank and Bank of Ireland.

Some hints of the plan’s contents have been provided by an IMF report on European economic reform that has been published on the Fund’s website.

The IMF recommends that the Republic should gradually cut unemployment benefits the longer a person is out of work.

It also said the country should review its minimum wage – one of the highest in the eurozone – to bring it in to line with the general fall in wage levels.

The findings were approved for publication on Monday by the same senior IMF official who has been leading the team negotiating with the Irish government.

However, in comments on Tuesday, senior IMF official John Lipsky insisted that the political decisions would be up to the Irish government.

The size and details of the cuts are probably of secondary importance, says Marco Annunziata, chief economist at Unicredit Bank.

Notes from a smaller Ireland

There is a risk that Taoiseach Brian Cowen’s government may not survive the vote on its 2011 budget – the first austerity budget in the four year plan – due on 7 December.

It follows the possible loss of support of two independent members of the Dail, as well as of some of his Mr Cowen’s Fianna Fail backbenchers.

“Markets are looking for whether or not the political consensus is sufficiently strong to support [the budget],” said Mr Annunziata.

Another concern is that the austerity measures may prove self-defeating.

More data on this currency pair

He said this in turn would worsen the deficit as tax revenues fell, unemployment benefit payments increased, and losses at the state-guaranteed banks mounted.

Although a bail-out is widely anticipated, it has done little to soothe market fears that the debt crisis will broaden to other European governments.

The interest rate the Spanish government had to agree to pay to raise short-term funds rose sharply at a bond auction on Tuesday.

The yield on longer-term 10-year bonds also rose to a new highs, reflecting these concerns.