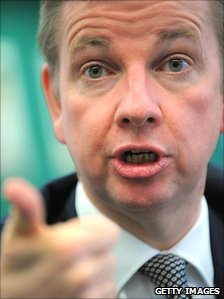 More than 400 English secondary schools could be redesignated “failing” under government plans to raise the “floor standard” used to measure performance.

It will apply when fewer than 35% of pupils get five GCSEs graded A* to C, Education Secretary Michael Gove said.

Currently, the level is 30%. Based on 2009 data, it would affect 439 schools. However, those below the standard but “making good progress” will get leeway.

The measures are to be unveiled on Wednesday as part of the government’s White Paper on education. It will also set out plans to move back towards single, final GCSE exams, slim down the national curriculum and overhaul school funding.

Mr Gove told the BBC the government had a duty to intervene when schools were failing.

“We’re going to ensure that we have new floor standards, tighter than ever, so that schools which don’t give students an adequate education – both primary and secondary schools – are taken over, the existing management team is removed, and a new team is put in place, in order to ensure that those schools succeed.”

The education secretary has already indicated he intends to force weak schools to become academies and will increase the number of top head teachers helping struggling schools from 393 to 1,000 by 2014.

Mr Gove said ministers would work to end what he called “one of the most unequal school systems in the world”.

“One of the most stunning statistics that tells us so much about our education system is the fact that out of 80,000 children eligible for free school meals last year, just 40 made it to Oxbridge,” he said.

“One of the missions of this coalition government is to make opportunity more equal and to ensure that the current two-tier education system ends.”

Other measures expected to be detailed in the White Paper are:

Greater powers for teachers to search for banned items and hand out no-notice detentions, while clarifying rights to restrain pupils physicallyAnonymity for teachers being investigated for inappropriate behaviour, to protect teachers from malicious allegationsScrapping rules limiting head teachers’ ability to observe teachers’ lessons to three-hours each yearReform of teacher training, including the introduction of special teaching schools modelled on existing teaching hospitalsMore assessment of teacher training applicants, including tests of character and emotional intelligenceOverhaul league tables to stop schools using vocational exams to boost their GCSE-level scoresRank the proportion of pupils gaining the new baccalaureate – meaning they have obtained at least grade C in maths, English, a language, one science and one humanities subjectA new reading text for six-year-olds