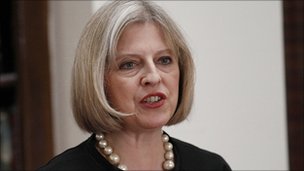 The government will cap the number of non-EU skilled migrants allowed to enter the UK at 43,000 next year, Home Secretary Theresa May is to announce.

Staff transferred by their companies from another country will be exempt from the regulation if their salary is more than £40,000.

BBC political editor Nick Robinson said the figure had been agreed after tense talks between the Tories and Lib Dems.

The parties had promised different policies at the general election.

Tory leader David Cameron promised to cap levels, while his then Lib Dem rival Nick Clegg said the policy ignored the fact that most immigration came from the EU.

Our correspondent said that after weeks of behind-the-scenes tension, the coalition would produce its compromise when Ms May gives a statement to MPs on Tuesday.

The 43,000 cap from next April will be 13% lower than this year’s figure but the highest figure recommended by the independent migration advisory committee last week.

It recommended that the number of migrant workers coming to Britain from outside the EU should be cut by between 13% and 25% next year.

However, it added that even this would contribute only 20% to the government’s target of reducing UK immigration to “tens of thousands”.

The other 80% cut would have come from student and family migration, it added.

Committee chairman Professor David Metcalf said the number of visas for skilled workers issued under what is called Tier One and Tier Two needed to be between 37,400 and 43,700 for 2011/12.