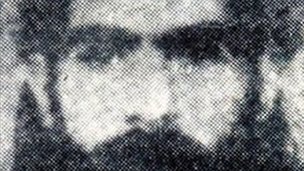 Most Afghan or US officials have never set eyes on Taliban leaders, such as Mullah Omar

An impostor posing as a leading Taliban negotiator held secret talks with Afghan officials, according to the New York Times.

The Afghans thought they were dealing with Mullah Akhtar Mohammed Mansour, a top Taliban commander.

But he was not Mullah Mansour and may not even have been a member of the Taliban, reports the newspaper.

He was paid “a lot of money”, and then disappeared, according to diplomatic sources.

The man in question came from Pakistan – where it is thought the Taliban’s leadership is based – and reportedly had three meetings with government officials.

President Hamid Karzai has said that talks with the Taliban will be essential to ending the nine-year war in Afghanistan.

But diplomatic sources say meaningful negotiations are still some way away.

In many cases the government is not sure who it is dealing with or whether they have the authority to speak on behalf of the Taliban.

Mullah Omar, the Taliban leader, has said consistently he will negotiate with the Afghan government only after all foreign troops have left the country.