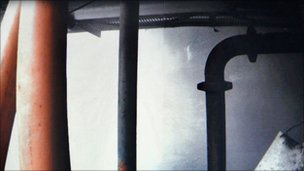 CCTV footage of the explosion has been broadcast
Related stories

Efforts to investigate the New Zealand mine where 29 people have been missing since an explosion Friday have resumed following the arrival of a new robot.

The first one to be sent down the Pike River mine on South Island broke down.

Engineers are also close to completing the drilling of a test shaft that will allow them to assess the air quality.

Earlier, the head of the police force said it was still not safe for rescue teams to go in, and that the situation was getting “bleaker by the hour”.

He said the risk of a secondary explosion remained high.

But the chief executive of the mine’s operator, Pike River Coal, insisted there was still hope that there were survivors. 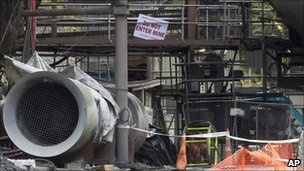 There has been no contact with the miners – 24 New Zealanders, two Australians, two Britons and a South African – since Friday.

Mr Whittall said the drilling of a bore hole into the mine is still 10m short of its target of 162m, and would be completed overnight.

His comments came after CCTV footage of the explosion – the cause of which has not been confirmed – was broadcast.

It showed stonedust being blown out of the entrance to the mine tunnel for several seconds after the explosion.

Mr Whittall said they know that the blast went on for a long time, and occurred 2.5km (1.55 miles) away from where the video was taken.

Each miner carried 30 minutes of oxygen, enough to reach oxygen stores in the mine that would allow them to survive for several days in spite of the build-up of carbon monoxide and methane.

While the men would reportedly have been carrying flasks of water, there is no food underground. Their cap lamps’ batteries last 24 hours.

New Zealand’s largest coal mineEmploys some 150 peopleOperational since 2008Accesses Brunner and Paparoa coal seams via 2.3km tunnel under Paparoa Ranges5.5m-wide, 4.5m-high tunnel bisects Hawera fault, through which methane gas is known to leakBlast is believed to have happened at 1530 (0230 GMT) on FridayTwo injured miners emerged from the tunnel entrance on Friday evening