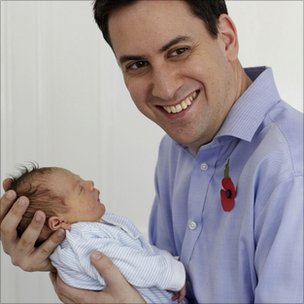 Mr Miliband has been on paternity leave for a fortnight, since second son Samuel arrived
Related stories

“Profound” changes to the Labour Party on the scale of Tony Blair’s New Labour reforms of the mid-1990s have been promised by leader Ed Miliband.

In a Guardian newspaper interview, as he returns from two weeks’ paternity leave, he warned his party that it faced a “long, hard road” ahead.

The party would review its policies and its organisation, including the rules for electing its leaders, he said.

A commission on Labour’s organisation will be launched at the weekend.

The aim is to turn the party into the “largest community organisation in the country”, Mr Miliband said.

Mr Miliband – elected in September – dismissed claims he had been too low-profile since winning the Labour leadership, saying he was not interested in “short-term fixes”.

“It’s about digging in, and it’s not about short-term fixes, nor shortcuts to success.

“There is a long, hard road for us to travel,” he told the Guardian. I am talking about change as profound as the change New Labour brought, because the world itself has changed massively, and we did not really change fundamentally as a party, or come to terms with the changes, and have not done so since 1994.”

The commission due to be launched will cover the issue of leadership elections, including the influence of the unions.

During the Labour leadership campaign – in which MPs, party members and trade unionists were balloted – Mr Miliband secured the backing of three of Britain’s four biggest trade unions.

His older brother and leadership rival, David Miliband, won a majority of support from Labour’s MPs at Westminster and party members, but Ed was ahead among members of trade unions and affiliated organisations.

He said in the interview that unions paying levies to the party had a “link to working people in the country and we’ve got to be linked to them”.

In terms of Labour’s policies there will also be a review, starting with “a blank page”, said Ed Miliband, although “not in terms of values”.

In an indication of the tax policy he intends to pursue, he suggested that he would support the retention of the 50p top rate of income tax into the future.

Shadow chancellor Alan Johnson has said previously that Labour “might not see the need for a 50p tax rate in five years’ time”.

But Mr Miliband said the tax rate was not simply about cutting the deficit: “It’s about values and fairness and about the kind of society you believe in and it’s important to me.”

One of the things that got him out of bed in the morning was that Britain remained a “fundamentally unequal society”, he said.

The plan, said Mr Miliband, was to “move beyond New Labour”.

“Here’s the paradox of Britain today,” he said: “Is Britain materially better off than it was 20 to 30 years ago? Yes, absolutely it is. But for some people the gap between the dreams that seem to be on offer and their ability to realise them is wider than it’s ever been before, and it seems much more of a struggle and that’s what interests me.

“How do you close that gap between the dreams that are apparently on offer and people’s ability to realise them? And I think the [coalition] are widening that gap.”