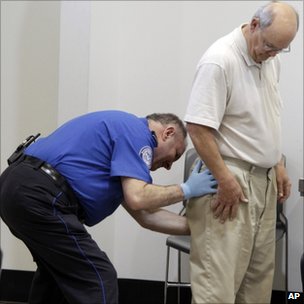 The US agency overseeing airport screening says it is working to make controversial new screening “as minimally invasive as possible”.

But Transportation Security Administration chief John Pistole said there would be no “short-term” changes.

Some passengers are objecting to revealing full-body scanners and “pat-downs” for those opting out of scans.

This week is one of the busiest for US airports as millions travel for Thursday’s Thanksgiving holiday.

Travellers who refuse to be screened via new full body scanners – in use at 60 US airports – must undergo an extensive hand search, which include touching of the genital region and breasts.

Mr Pistole appeared to row back from a position he stated on Sunday in which he said the TSA had no plans to back away from the procedures.

“We’re going to look at how can we do the most effective screening in the least invasive way knowing that there’s always a trade-off between security and privacy,” he told NBC’s Today programme on Monday.

The official said security officials were trying to determine how methods might be changed and still protect against a passenger posing a security threat.

While there have been complaints about the new procedure, recent polling suggests a large majority of Americans support the use of full body X-ray machines to help security officials check underneath passengers’ clothing.

There are also fears that potential protests against the new measures could disrupt the Thanksgiving holiday weekend.

A loosely-organised National Opt-Out day is scheduled for Wednesday – with organisers urging all those against the new screening checks to exercise their right to opt-out of the full body scans in favour of a more time-consuming pat down check.

Mr Pistole implored passengers not to take delaying actions, saying they would only serve to “tie up people who want to go home and see their loved ones”.

Paul Ruden, a spokesman for the American Society of Travel Agents, said: “Just one or two recalcitrant passengers at an airport is all it takes to cause huge delays.”

Clinton would avoid pat down

Mr Pistole’s latest comments come after a weekend in which US President Barack Obama and Secretary of State Hillary Clinton both spoke out on the issue.

Mr Obama told the TSA: “You have to constantly refine and measure whether what we’re doing is the only way to assure the American people’s safety”.

Ms Clinton, speaking on a Sunday morning talk show, said she would not submit to a security pat down “if I could avoid it”.

She added that everyone, “including our security experts, are looking for ways to diminish the impact on the travelling public” and that “striking the right balance is what this is about”.