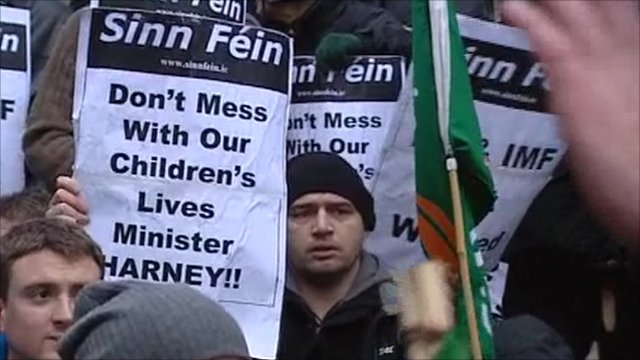 Protesters have marched on the Irish parliament building in Dublin

The Republic of Ireland’s two main opposition parties have called for an immediate general election after an EU-led bail-out of the country’s economy.

The Labour Party and Fine Gael spoke out after the Green Party, junior partners in the governing coalition, called for an election in January.

The government is facing public anger after accepting up to 90bn euros (£77bn; $124bn) in loans.

It will publish a four-year economic plan on Wednesday.

“What is needed now is an immediate general election so that a new government, with a clear parliamentary majority, can prepare the four-year economic plan, complete negotiations with the EU and IMF, and frame a budget for 2011,” Fine Gael leader Enda Kenny said in a statement.

Labour leader Eamon Gilmore said it was “essential that we have a new government elected as soon as possible”.

The BBC’s Mark Simpson in Dublin says the most likely shape of the next government is a right-left coalition between Fine Gael and Labour.

He says that in theory a general election will not stop the EU-led bail-out or the austerity budget, which will be unveiled on 7 December.

Even with Green Party support, the government of Prime Minister Brian Cowen has just a three-seat majority in parliament and faces a by-election in one of those seats on Thursday.

In a statement, Green Party leader John Gormley did not say the party was pulling out of the coalition but he made a number of demands and said a general election date should be set for the second half of January.

The ruling coalition also relies on two independent MPs, who both said on Monday they could not give a commitment that they would support the budget unless the opposition had a hand in drafting it.

What went wrong in the Irish Republic 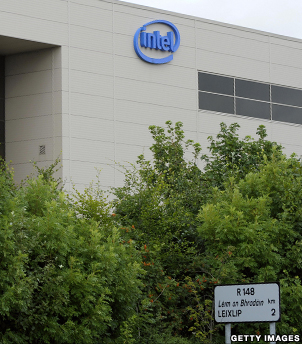 The 1990s were good for the Irish Republic’s economy, with low unemployment, high economic growth and strong exports creating the Celtic Tiger economy. Lots of multi-national companies set up in the Republic to take advantage of low tax rates. 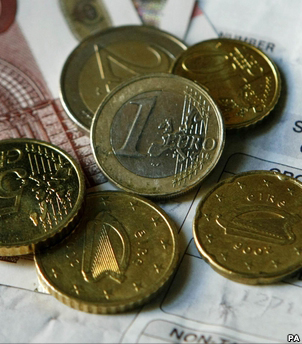 At the beginning of 1999, Ireland adopted the euro as its currency, which meant its interest rates were set by the European Central Bank and suddenly borrowing money became much cheaper. 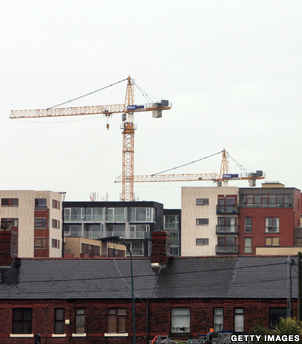 Cheap and easy lending and rising immigration fuelled a construction and house price boom. The government began to rely more on property-related taxes while the banks borrowed from abroad to fund the housing boom.

All this left Ireland ill-equipped to deal with the credit crunch. The construction sector was hit hard, house prices collapsed, the banks had a desperate funding crisis and the government was receiving much too little tax revenue.

The economy has shrunk and the government has bailed out the banks. A series of cost-cutting budgets have cut spending, benefits and public sector wages and raised taxes. But there are still doubts about future government funding. 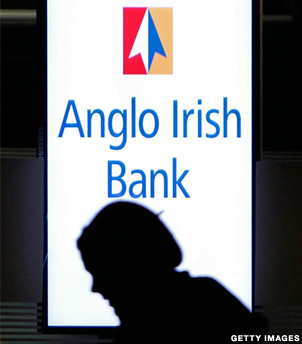 The main concern for the Republic’s economy is its banks, most of which are now controlled by the government. They have had to borrow at least 83bn euros (£71bn) from the European Central Bank because other banks will not lend to them.
BACK {current} of {total} NEXT

Mr Gormley, the current environment minister, stressed the election should only be held after the 2011 budget had been passed.

“Leaving the country without a government while these matters are unresolved would be very damaging and would breach our duty of care,” he said in a statement.

“The past week has been a traumatic one for the Irish electorate. People feel misled and betrayed. But we have now reached a point where the Irish people need political certainty to take them beyond the coming two months.”

A tough budget is the trade-off for the bailout that Irish ministers agreed with the EU and the IMF on Sunday.

European shares and the euro both fell following the election call from the Green Party.

They had risen in earlier trading after the announcement of the bailout.

The UK is expected to contribute about £7bn of the bailout. Chancellor George Osborne said: “Ireland is a friend in need, and we are here to help.”

The crisis in the Irish Republic has been brought on by the recession and the almost total collapse of the country’s banks.

Once known as the Celtic Tiger for its strong economic growth – helped by low corporate tax rates – the country has experienced a property bubble burst, leaving its banks with huge liabilities and pushing up the cost of borrowing for them and the government.