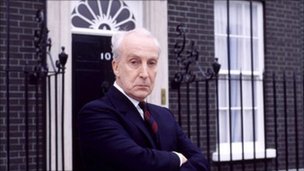 The ashes of actor Sir Ian Richardson have been buried in the foundations of the new £112m Royal Shakespeare theatre in Stratford-upon-Avon.

Sir Ian and his wife Maroussia were founding members of the Royal Shakespeare Company (RSC) in 1961.

The Scottish actor spent 15 years on the stage in Stratford and later found TV fame in TV dramas Tinker, Tailor, Soldier, Spy and House of Cards.

His ashes are buried just in front of the stage in row A.

Sir Ian’s son Miles, 47, who is also an actor, got the idea for burying his father’s ashes in the theatre’s foundations when he was touring the unfinished theatre two years ago with his mother.

The new theatre and revamped Swan Theatre will open to the public on Wednesday, following a four-year redevelopment.

Previews and activities will take place there until February when the first productions open.

The RSC has chosen familiar productions to help fully test the auditorium and backstage facilities – King Lear and Romeo and Juliet.

The theatres will be formally reopened in April 2011 coinciding with the company’s 50th birthday season.